Lord of the Snowy Plains

"Sigma has paid for the use of my power. Working for him is a million times better than piddling around on the South Pole with nothing to do."
―Chill Penguin, Mega Man Maverick Hunter X

Chill Penguin, known as Icy Penguigo (アイシー・ペンギーゴ, Aishī Pengīgo) in Japan, is one of the eight Mavericks in Mega Man Maverick Hunter X. Originally a Maverick Hunter in the 13th Polar Battalion, Chill Penguin was an acquaintance of X and Zero, but having grown bored and dissatisfied with his position at the South Pole, Chill Penguin joined Sigma's rebellion as it was more entertaining than his mission.

LORD OF THE SNOWY PLAINS

Reploid specifically designed for extremely cold regions, formerly of the 13th Polar Battalion. Had been operating on a wholly unsatisfying mission at the South Pole, but once he heard Sigma's call to rally Reploids, Chill Penguin started operating with the 17th Battalion. His thought circuits are designed to be flexible so he can perform missions with his small-size body, but this has gained him a reputation among other Reploids of being somewhat warped. He's on bad terms with Flame Mammoth, who relies solely on brute strength.

Absorbs moisture in the air and fires it in crystallized form. If it hits an enemy or a hard surface, it breaks into 5 pieces and hits everything around it.

Chill Penguin was a Maverick Hunter in the 13th Polar Battalion, stationed at the South Pole. Shortly before Sigma's rebellion, he was transferred to the 17th Elite Unit under Sigma's command; it is implied that Chill Penguin was aware of Sigma's plans at this point and had already agreed to join his army.[1] Within the Elite Unit, Chill Penguin led a company called the "Chill Penguin Company," identified by light blue armor-clad humanoid Reploids.

Chill Penguin and his company were called in to deal with a Maverick Mechaniloid. His troops were put in danger by the Mechaniloid, and he assisted from afar by freezing its legs to the ground. He frantically commanded X to shoot the Mechaniloid's generator and was exasperated when X hesitated, requiring Sigma himself to step in. In the battle's aftermath, Chill Penguin reprimanded X for his mistake endangering the mission.

Later, Chill Penguin attended a briefing at Hunter Base that revealed the Mechaniloid had been hacked. He was sent to track down the perpetrator alongside Storm Eagle.

After Sigma publicly announced his rebellion, Chill Penguin joined his forces and occupied an Abandoned Missile Base in a snowy climate, implying that he may have planned some sort of missile strike. When confronted by X, Chill Penguin reveals that Sigma has paid for his services, and that he joined the rebellion so he could escape his boring post at the South Pole. He then attacks X, but is destroyed in the ensuing battle.

In Vile Mode, Chill Penguin is startled yet amused by Vile's sudden rampage, calling him a "Maverick who thought he was a Hunter." He fights Vile and is destroyed.

Chill Penguin is a relatively straightforward boss fight, maintaining an attack pattern nearly identical to his Mega Man X incarnation. He is briefly stunned when hit by a Charge Shot, and he is especially weak to Fire Wave which wreathes him in flames.

Chill Penguin as he appears in Maverick Hunter X appears in TEPPEN as a unit card alongside his original look.

X: Chill Penguin! Why have you sided with Sigma? Chill Penguin: Sigma has paid for the use of my power. Working for him is a million times better than piddling around on the South Pole with nothing to do. X: How could you!? What Sigma's doing is treasonous!

Chill Penguin: Vile... I've never seen a Maverick who thought he was a Hunter before. Vile: Hunter? Ha! I've never once entertained such thoughts. Chill Penguin: Wah ha! Good answer, but you're still acting crazy. What exactly do you plan to do? Vile: Same thing I always do... Crush anyone and anything who gets on my bad side! 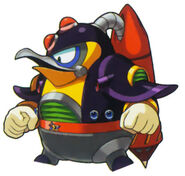 TEPPEN
Add a photo to this gallery

Retrieved from "https://megaman.fandom.com/wiki/Chill_Penguin/Maverick_Hunter_X?oldid=355798"
Community content is available under CC-BY-SA unless otherwise noted.