"Let me show you my illusions."
—Choice Man

Choice Man (チョイスマン, Choisuman) is a boss who appears in Pachislot Rockman Ability. He is one of the Wily Numbers. Choice Man has the ability to create copies of himself at light speed, deceiving his opponents while attacking. When out of electricity he charges himself by connecting a plug to his chest. When defeated, the player may obtain the Special Weapon Bell Spark, which summons an electrical storm and fires a concentrated lightning bolt down on the opponent. He is weak to Coin Woman's Coin Bomb. 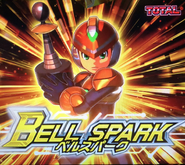 Trancy with Bell Spark
Add a photo to this gallery
Retrieved from "https://megaman.fandom.com/wiki/Choice_Man?oldid=279172"
Community content is available under CC-BY-SA unless otherwise noted.