"I know now... that I must put this power that you've given to me to good use! I want to try and help my new friends."
―Cinnamon, Mega Man X: Command Mission

Cinnamon (シナモン, Shinamon) is a young Reploid from Mega Man X: Command Mission built personally by Professor Gaudile. She joins X's party, rather than stay with Professor Gaudille, inspiring him to join the Resistance command team as well in a scientific capacity.

One of Cinnamon's main functions is the restoration and repair of her fellow Reploids, and thus she was built with an angelic nurse-like appearance. She also houses the powerful Force Metal Generator, which allows her body to process and synthesize Force Metal.

Cinnamon is a Reploid designed with the appearance of a cute young girl. She has white and blue armor and golden yellow hair. Her armor and hair are indicative of her status as a healer and miracle-maker, resembling that of a nurse with angel wings. She is one of the few female Reploids to wear a skirt rather than full leggings or other armor. Inside of her chest is the coveted Force Metal Generator.

Cinnamon's personality is best described as cute; she is polite, kind, and has a tendency to let her curiosity get the best of her. She can seem a bit naive as well, as demonstrated by her encounter with Marino, though this could be the result of being a relatively young Reploid, a recent creation. However, this also means she has a loving and optimistic heart and sees the best in people, shown in how she heals her abductor Marino after she was attacked by Dr. Psyche's Preon guards.

Cinnamon first appears in Gaudile Laboratory, where she is discovered by Marino in her search for the Force Metal Generator. After realizing that Cinnamon herself is the Force Metal Generator, she plans to abduct her and takes her away. However, the two are intercepted by Dr. Psyche, whose guards gun Marino down. Shocked and saddened, Cinnamon begins to heal the unconscious Marino, impressing Dr. Psyche with her abilities. He then takes her away.

X's group eventually hunts down Dr. Psyche, who has Cinnamon in his custody. After they defeat the mad scientist, Cinnamon pleads with Professor Gaudile to let her join X and the Resistance in order to help fight the Rebellion Army. Gaudile reluctantly complies, even joining the Resistance himself to lend his scientific prowess. After this chapter, Cinnamon has little narrative importance, but is available to be spoken to and used in battle by the player freely.

Cinnamon actually holds Professor Gaudile's most sought-after creation, the Force Metal Generator, inside of her. This item goes on to become very important in the game, capable of fusing countless recipes of several Force Metal alloys together in order to create stronger alloys to increase party members' statistics and capabilities.

Her Action Trigger, Angelic Aide, heals herself and her teammates while she floats in mid-air with the flapping assistance of her winged phoenix-shaped liquid-metal blonde hair. In her Iron Maiden Hyper Mode, her attire changes from that of a nurse to that of a dark maid, indicating her increase in strength.

Gaudile is always overprotective about Cinnamon, most likely because of the fact that he created her, and thus she is like a "daughter" to him. This is augmented due to the Generator inside her, as he does not want something with such vast capabilities falling into the wrong hands.

Cinnamon is a very defensive character, with natural resistance to all Elemental Attacks and naturally high Erosion capacity. However, her LE is very low when she is recruited, likely in an attempt to make up for her superior defensive stats, and players looking to use her as quickly as possible should take her through a few battles in the Gaudile Lab before attempting the next area so as to bring her Level closer to up to speed. She is also the only character that can use either of the Supra Force Metal fragments at lower levels without incurring Erosion penalties thanks to her naturally high capacity. Her damage output is not as reliable, but is just high enough to make using her as an offensive character possible.

Her Action Trigger is arguably the second or third most useful in the game as it is much easier than it seems and can get the party out of a pinch without using up any Sub Tank Energy or healing items. Her Hyper Mode, Iron Maiden, further increases her already good defensive capabilities while giving her more viable offensive powers, making it a decent choice for increase. Overall, Cinnamon is arguably the best character in the game outside of X and Zero thanks to her primarily supportive role in-battle, making her an easy switch-in for players looking to trade Axl off of their primary party.

Cinnamon's method of offense against opponents is by slapping opponents with her gloves, which can be replaced by other sorts of devices such as an injection to infect enemies with a virus, or various other implements.

Cinnamon is a S rank Hunter Program. Her skills are Syringe and Angel aura. Her Hyper Mode, Iron Maiden, appears as a skin. 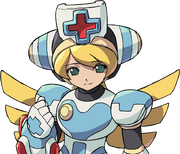 Cinnamon on the cover art. 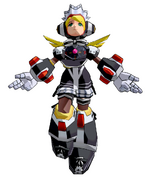 Some of Cinnamon's weapons. 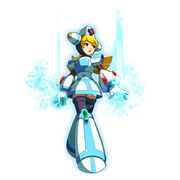 Artwork of Cinnamon from Rockman Online. 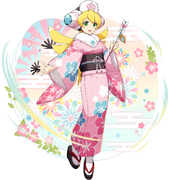 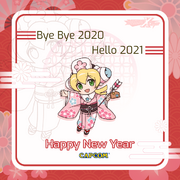 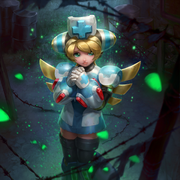 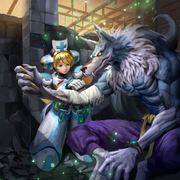 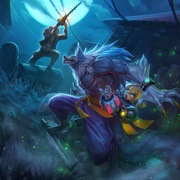 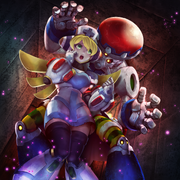 Cinnamon in the TEPPEN card Abduction.

Cinnamon in Tower of Saviors.