Clark (クラーク, Clark) is a navigation Wizard that welcome people in the Satellite Server from the Mega Man Star Force 3 official webpage. In the Japanese site he also gave news like when new sections were added and notices from the Wave Masters events, along with a Hertz and a Satella Police Wizard named Garoner. Although he is related to the Mega Man Star Force series, he didn't appear in any game.

When Clark was damaged for the second time on November 5, 2008, he had a more serious expression, an antenna, and the Satella Police emblem was added to his chest after the repair. When he was damaged again on March 13, 2009, he returned to his original appearance.

In August 2009, he announced that the official site of Rockman.EXE Operate Shooting Star opened, and later said that A.C. Eos trusted him a prototype time-travelling program called "Clock PGM" for him to test, which opened a warp hole that made him disappear.[1] After this, the Rockman.EXE Operate Shooting Star site was updated and Clark appeared there, having traveled 200 years to the past. The last update from Shooting Star Rockman 3 was on August 21, 2009, where the Hertz was worried with Clark's disappearance. 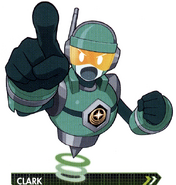 Clark with the Satella Police mark

Clark details
Add a photo to this gallery

Retrieved from "https://megaman.fandom.com/wiki/Clark?oldid=289993"
Community content is available under CC-BY-SA unless otherwise noted.