When Mega Man X fought off the revived Maverick Wire Sponge Limited, the Limited inside the Maverick soon realized it would be overwhelmed by X's strength. To save itself, the parasite discarded Sponge's body and attempted to latch onto X. Fortunately, its core was shot out by Zero, but the organic material bestowing the Limited's abilities splattered on the X-Buster and infected it, causing it to mutate into the powerful Clear Buster (クリアバスター, Kuria Basutā). With it, X is able to use any Special Weapon he had used in the past, even without their chip installed.

Following the defeat of all eight Limit Reploids, the Clear Buster begins transforming again during the fight against Schmitt, paralyzing X in pain. Zero steps in and skillfully counters all of Schmitt's attacks until the Incept Chaser targets the defenseless X, leading Zero to shield his friend and be taken out of the fight. The act buys enough time for X's buster to complete its evolution into the Clear High Buster (クリアハイバスター, Kuria Hai Basutā). X fires his new weapon, gravely wounding Schmitt. The arm cannon further increases its highly destructive power by drawing on his health as a double-edged sword. Schmitt escapes to be healed by the Mother Limited, only to be absorbed and processed into "X" (known as "iX" by fans).

While losing against "X", the Limited in X's buster fluctuated again, spreading through his body to become the protective Clear Armor. It granted the ability to absorb attacks and repair damage, but at the cost of X's freedom as the growing parasite took control. The fight looked like it would end with both combatants dead as X and "X" traded fully charges shots through each others' chests, but X had dodged just enough that "X"'s shot grazed though his Clear Armor's breastplate, freeing him from the Limited.

In Rockman X Mega Mission 2, it is revealed that small traces of the Limited remained in X's arm, which reacted to the Limited Field set up by the Order Breakers and made X able to use Special Weapons again, but these traces didn't evolve into an armor. After defeating four Mavericks, X succumbs to the field's effects and is captured by the Order Breakers.

The Clear Armor appears in the manga adaptation of the history in Rockman Remix. 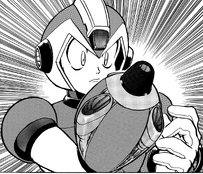 The Clear Buster in Rockman Remix. 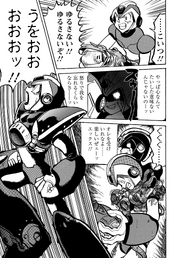 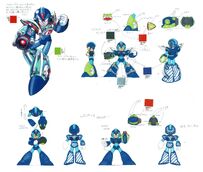 Clear Armor Concept Art
Add a photo to this gallery
Retrieved from "https://megaman.fandom.com/wiki/Clear_Armor?oldid=260802"
Community content is available under CC-BY-SA unless otherwise noted.