Cloud Man (クラウドマン, Kuraudoman) is a Robot Master from Mega Man 7 who was originally created as a weather control robot, but was stolen and modified for combat by Dr. Wily, removing his rainfall equipment and enhancing his lightning equipment. Cloud Man has no legs, as he was designed built to hover above the ground using a gravity controller. He can control the weather and create powerful winds to push his opponents, and try to strike them with his Thunder Bolt.

Cloud Man starts by floating up from the center of the room, then electrically charging himself (invincible while doing so) to fire his Thunder Bolt from that height towards Mega Man. The Thunder Bolt acts as a fast-moving lightning bolt that, upon hitting the ground, creates four electric spheres (two from each side of the Thunder Bolt) that travel along the floor. It can be avoided by jumping over the lightning so that the attack fails to hit Mega Man, or even fails to hit the ground at all.  Right after that, he lowers himself to Mega Man's level, and then casts rain and wind that pushes Mega Man either towards one of the pits or towards Cloud Man.  If Mega Man collides with Cloud Man at this point, Cloud Man will push him away, dealing damage.  While the rain and wind are still active, Cloud Man will electrically charge himself again and shock the floor to create more electric spheres. As the rain and wind's power are higher than Mega Man's running speed, the player may have to slide if it is necessary to avoid falling, while jumping so Mega Man avoids the electric spheres. After the rain stops, Cloud Man starts chasing Mega Man, leaving a small gap below him so Mega Man can slide to avoid contact with him. He then repeats the attack pattern.

His weakness is the Danger Wrap, as this weapon encases him on a giant bubble, floating upwards and eventually detonating, making him fall to the ground due to his cloud disappearing, and restart his attack pattern. However, he is still invincible if he is charging himself. If it is used while it's raining, the rain will instantly stop. It defeats him in seven hits.

Cloud Man's behavior is the same as in Mega Man 7, except there are no bottomless pits in his arena. Cloud Man could be difficult to defeat without the Scorch Wheel, but the Mega Buster is just as effective.

Cloud Man holds Duo hostage with help from Ice Man and Guts Man, and later joins Scorpio aboard his airship along with Yamato Man.

Displays the amount of damage in units that Cloud Man will receive from each Special Weapon in Mega Man 7.

Cloud Man debuts in Worlds Collide as part of large army of Robot Masters assembled to attack the force of heroes led by Sonic the Hedgehog and Mega Man. 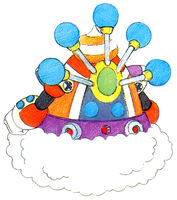 Back side view of Cloud Man.

Cloud Man in the manga Rockman 7. 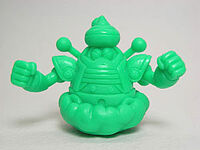 Retrieved from "https://megaman.fandom.com/wiki/Cloud_Man?oldid=304108"
Community content is available under CC-BY-SA unless otherwise noted.