"Maverick Hunters and Reploid researchers are all liars! I may end up betrayed and deleted! So I will delete you first!"
―Commander Yammark, Mega Man X6

Commander Yammark is a male Reploid with a design inspired by a dragonfly. This can be seen in the large eye-like gems on his helmet, four wings on his back, and tail-like appendage. His armor is primarily deep green in color, and he has a red visor through which only his eyes can be seen. Like all of Gate's creations, he possesses a rhombus-shaped gem in his forehead. He appears overall more humanoid in design than the other Nightmare Investigators.

Yammark is a dutiful and hot-blooded servant of Gate. He seems to have developed trust issues due to being betrayed in the past, refusing to cooperate with the Maverick Hunters and instead lashing out because of this paranoia.

Commander Yammark was originally created by Gate to support nature preservation projects, becoming the leader of an ecological observation team. In order to ensure the most thorough investigations, he is equipped with the Yammar Option, independent dragonfly Mechaniloids that act as his eyes and ears. While on duty he once accidentally set a fire that burned a large portion of a forest due to control disorder. He wasn't accused of the incident, but some time later, someone sabotaged his flight system, leading to a crash that killed him. Gate later resurrected Yammark to aid in the investigation of the Nightmare, being responsible for the Amazon Area. Due to what happened to him, he developed paranoia, being distrustful towards Reploid researchers and Maverick Hunters, and attacked the Hunters when they checked what he was doing, leaving them no choice but to destroy him.

Commander Yammark will constantly use Yammar Option to form small dragonflies around himself for defense and to use in his attacks, starting the battle with three. He may form anywhere from three to six dragonflies, depending on how much health he has left. He is the easiest to defeat with the starting weapon, but he falls even faster to X's Ray Arrow or Zero's Rekkoha.

Commander Yammark: Yes! I'm in charge of the Amazon area. Tell me! What is Zero up to? You must know something.

X: Zero has nothing to do with this! Stop accusing him!

Commander Yammark: I won't trust both the Maverick Hunter and Reploid researcher. I don't know what you're thinking... I won't end up being betrayed and deleted! I will delete you first!

Commander Yammark: Yes! I'm in charge of the Amazon area. Tell me! What will you do with the Nightmare?

Zero: Are you serious? It is your silly toy!

Commander Yammark: Maverick Hunters and Reploid researchers are all liars! I may end up betrayed and deleted! So I will delete you first!

Commander Yammark and many other Mavericks served as the antagonists of the Worlds Unite crossover event, where they were revived by Sigma-1 and unleashed against the heroes aboard the Sky Patrol. They were then dispatched to various worlds through the Genesis Portals to add to Sigma's power by planting Unity Engines. 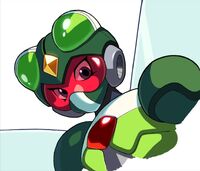 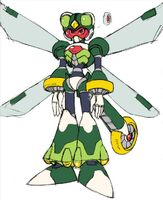 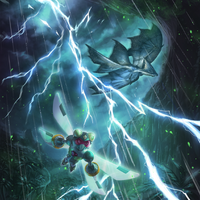 His name "Yammark" is derived from "yanma (ヤンマ)", Japanese for dragonfly. In particular, it refers to large size dragonfly (family Aeshnidae). In addition, the whole dragonfly is generally called "tonbo (トンボ)".

Retrieved from "https://megaman.fandom.com/wiki/Commander_Yammark?oldid=349863"
Community content is available under CC-BY-SA unless otherwise noted.