Commando Man (コマンドマン, Komando Man) is a Robot Master from Mega Man 10. He is able to stun the player by pounding the ground, and shoots Commando Bombs that home in on Mega Man, Proto Man, or Bass. Commando Man is said to inflict serious amounts of damage. His stage is set in a desert which has a vicious sandstorm that can obstruct the player's vision and push them into pits or other hazards.

Before contracting Roboenza, Commando Man was a mine-sweeping robot who used remote detonation techniques to clear minefields all over the world. It is also said that he enjoys tasting oil from the various countries he visits. [1]

Commando Man's strategy is to mainly fire Commando Bombs at the player while jumping around the room. He can fire them while on the ground and at the apex of a jump, while the bomb will arc down when fired from above, if the player passes under it. When Commando Man jumps high and rises his arms as he drops down, he will cause an earthquake that holds Mega Man on place vulnerable. A Commando Bomb can be easily avoided by jumping over it when he fires it on the ground (though it has a small chance of arcing up), while an aerial Commando Bomb should be avoided by getting out of the way, to the side of the stage on which the player has more space. The player should be careful as the shockwave from the bomb reaches out and can still hit them. If Commando Man jumps high, the player should jump to avoid the earthquake. On Hard Mode he gets a new attack: he jumps low with his arms risen, creates an earthquake as he lands to stun the player by punching the ground, and creates an explosive shockwave that travels all the way across the room. The earthquake can be avoided by jumping, whereas the player should jump a second time to avoid the shockwave. He is vulnerable to attacks as long as he has not jumped too high.

His weakness is the Wheel Cutter, and it can cancel out a Commando Bomb when it collides with it, without causing a harmful explosion. It defeats him in seven hits.

Displays the amount of damage in units that Commando Man will receive from each Special Weapon in Mega Man 10.

*For Proto Buster, the first is normal hit; the second is charged up.

Commando Man appeared in the crossover Worlds Collide as part of a large army of Robot Masters deployed by Dr. Wily and Dr. Eggman against their enemies, who were being led by Mega Man and Sonic the Hedgehog.

Concept artwork of Commando Man and his stage. 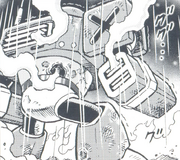 Commando Man in the manga Rockman 10 -Extra F-.
Add a photo to this gallery

Retrieved from "https://megaman.fandom.com/wiki/Commando_Man?oldid=347443"
Community content is available under CC-BY-SA unless otherwise noted.