Concrete Man (コンクリートマン, Konkurītoman) is a Robot Master from Mega Man 9 modeled after a construction worker that Dr. Light created to be the supervisor of dam construction.

He is very dedicated to his job, but is mostly stubborn and will tell off any robots that are lazy on the job.

Concrete Man is one of the eight Robot Masters whose period of use had expired and was scheduled to be scrapped. Dr. Wily pretended to be concerned by offering to repair them, reprogramming the tricked robots to help him conquer the world.

He tries to stop the player with his Concrete Shot, jumps from the top of the screen and shakes the floor, which will make Mega Man stumble, or tackles.

Concrete Man's weakness is the Laser Trident due to its ability to penetrate most shielding. It can also cause critical damage to him, and can pierce through the blocks of the Concrete Shots.

In the end credits picture, he is seen outside Dr. Wily's fortress, chasing Wily for his trickery, having been rebuilt after the events of the game.

Displays the amount of damage in units that Concrete Man will receive from each Special Weapon in Mega Man 9.

Concrete Man's stage makes the player go through several hollow/solid block challenges, along with a mini-boss rush and a small up and down platform section at the end of the stage.

Concrete Man appears in the short Mega Man Megamix manga story "For Whose Sake?" included in the booklet of Rockman 9 Arrange Soundtrack.

Concrete Man appeared in issue 17 of Archie Comics' Mega Man comic series, where Dr. Light brings him to Guts Man so he can finish the construction of a dam earlier, which could collapse due to the heavy rain and flood the town downstream. Guts Man and Concrete Man began competing, and when they were about to start fighting, the dam starts leaking and they team up to finish the work. In the end, the two become friends and share some karaoke and E-Tanks after their work, singing Brandnew Way together.

He also briefly appears during the Worlds Collide arc in Sonic the Hedgehog Issue 250, where he alongside Stone Man fought Knuckles the Echidna. It isn't made clear whether this Concrete Man was the real deal, having been reprogrammed again, or a copy created by the time distortion fields in the Skull Egg Zone. Regardless, he and his fellows either ceased to exist or were returned to their proper place in time and space by Mega Man. He would later appear in the Worlds Unite crossover in Sonic Universe #76, where he joined his friend Guts Man and the other first generation Robot Masters in the reconstruction of Dr. Light's Laboratory. He also appears in Issue 53, where he and Guts Man are setting up the Robot Museum. He also considers allowing himself to be recycled since he doesn't like waste. This, however, upsets Mega Man, who disagrees with the view of Guts Man and Concrete Man that as robots they are just tools who will eventually cease to be useful. 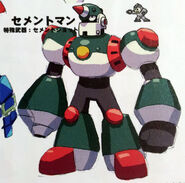 Concrete Man in the ending credits of Mega Man 9 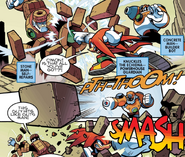