A CopyBot, known as Copyroid (コピーロイド, Copyroid) in the Japanese version, is a machine used in Mega Man Battle Network 6 and Rockman.EXE Beast. It is a humanoid-shaped machine which, when a NetNavi is inserted into it, will allow the NetNavi to move in the real world. A CopyBot will take on the likeness of the Navi inserted. While CopyBots aren't normally able to use Battle Chips or attacks and can only be used for a short period, modified ones are shown to be able to attack, such as Colonel using Screen Divide in one to destroy Sky Town's weather computer, and have a longer duration, such as the one used by Iris.

CopyBots were invented by Makoto Aoki. Zoano Punk helped her complete the CopyBots so they could be massproduced and stolen to allow Zoanoroids to appear in the real world and widen their search for Trill.EXE.[1] It is utilized by Zoanoroids for the remainder of the series and is also used by Colonel and Iris.

Although not specifically stated, it is hinted that the Tadashi Hikari of Beyondard also created Copyroids.

Small, regular and extra large sized Copyroids are used by BubbleMan, Chirol, and Captain Kurohige to cause chaos in the real world.[2] 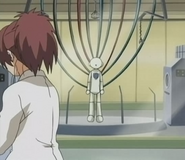 Makoto Aoki commencing a trial that attempts insertion of a dummy Navi, in aims of occupying a Copyroid. (Rockman.EXE Beast)