Gekkan CoroCoro Comic (月刊コロコロコミック, Gekkan KoroKoro Komikku) is a Japanese monthly manga magazine published by Shogakukan, starting on May 15, 1977 as a magazine for Doraemon. Its main target is elementary school aged boys, younger than the readers of shōnen manga. The name comes from a phenomime korokoro (ころころ) which means "rolling" and also represents something spherical, fat, or small, because children supposedly like such things. The magazine is A5-sized, about 6 cm (2¼ in) thick, and often more than 800 pages in length.

The magazine also has other side publications:

CoroCoro regularly promotes toys and video games related to their manga franchises, releasing stories and articles featuring them. Pokémon's big success in Japan owes to this in a way; the Game Boy game Pocket Monsters: Blue was sold exclusively through the magazine at first, which helped CoroCoro's sales as well. CoroCoro is also often a source of information about upcoming Pokémon games and movies. CoroCoro also had tie-ins with Capcom, including the Mega Man franchise in the 2000s.

Rockman.EXE 3 cover concept art.
Add a photo to this gallery

CoroCoro Aniki Autumn 2018
Add a photo to this gallery 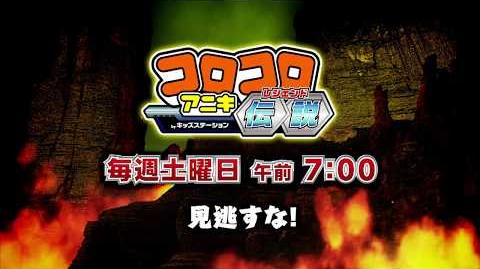 Retrieved from "https://megaman.fandom.com/wiki/CoroCoro_Comic?oldid=289400"
Community content is available under CC-BY-SA unless otherwise noted.