Count Zap, known as Count Elec (エレキ伯爵 / エレキはくしゃく, Ereki Hakushaku, lit. Electric Count), is a member of the World Three and operator of ElecMan.EXE. In the first Mega Man Battle Network game, he tried to hack in to the city's power plant. He was since sent to jail, and his NetNavi was given to his wife, Ann Zap.

Count Zap is cheerful and hyperactive in the anime, where he is also a fan of rock and roll. Count Zap also has a love for electricity, evidenced by his usage of electrical terms like "shocking" quite often, and also doesn't seem to take his work as seriously as the other members of the WWW. In the games, Count Zap is quite different from the anime, being depicted as creepy and uncaring, doing anything to get what he wants even if it means killing many people. Count Zap also seems to be older in the games. He is an avid player of the guitar and his light bulbs flash constantly.

Count Zap makes his appearance in the first Mega Man Battle Network as a boss character. His role in the game is to get the Elec Code, in order to awaken the Life Virus. In the game, Count Zap is more serious than his anime counterpart and takes his mission seriously.

Although he doesn't appear in Mega Man Battle Network 2, he is alluded to, where it is revealed that he was the long-lost brother of the boss character Gauss Magnus in a quiz question by QuizKing late into the game. It's unknown what happened to him after the game until Mega Man Battle Network 6, where his wife, Ann Zap, says he was arrested and is still in jail. Ann also implies that during this time, the Count was also recuperating and giving up his criminal ways.[6] She uses his NetNavi and works hard to restore the Zap family's name.

Count Zap appeared as one of the opponents in the Battle Chip GP.

In the manga, Count Zap and Wily capture Yuichiro Hikari to help them create the Life Virus. After the Life Virus' defeat, Count Zap managed to escape, but it seems that he has no place to go as he's last seen on the streets with his clothes worn-out. He says he doesn't need ElecMan anymore and sends him away. 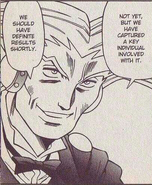 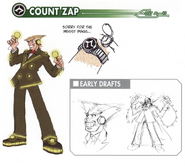