End of the World

None, but Sky Chaser or Thunder Stab work well.

"I know that what I'm doing makes me seem like Weil. I don't care if people think I am a Maverick! Someone has to take a stand and fix humanity's course."
—Craft

Craft (クラフト, Kurafuto, also romanized as Kraft in Japan) is a character and the secondary antagonist from Mega Man Zero 4. He is a military officer-type Reploid [1] who was old friend of Neige, and is working for Dr. Weil as the commander of the Einherjar Eight Warriors, with the objective of destroying Area Zero with Operation Ragnarok.

He appears calm, controlled and loyal to Dr. Weil. Craft said that he loved Neige and promised to protect her, which is why he kidnapped her. In the beginning of the game, he followed Weil because he had Neo Arcadia and all the world's energy in his grasp. He had a crisis of faith and thought that the dismal state the world was in couldn't be changed, even by heroes, which he believes are now a thing in the past.[2] However, throughout the game, he experiences a change of heart. Inspired by Neige, he rebelled against Dr. Weil [3] and used Ragnarok in an attempt to kill him. In the end, he finally becomes his old self again, albeit after taking fatal wounds from facing Zero, requesting him to watch over the world.

Craft first appears in the end of the second stage, where he and the Einherjar Eight Warriors are introduced. After defeating four of the Einherjar Eight Warriors, Craft goes to Area Zero and fights against Zero to capture Neige. He captures Neige to protect her, as Weil plans to destroy the locale. When Zero goes to rescue Neige from the prison, Craft and Weil appear, but Neige and Zero manage to escape, and Craft has doubts about the actions of Weil and Neige. After the defeat of all Einherjar Eight Warriors, Craft betrays Weil and fires the Ragnarok at Neo Arcadia, also destroying Weil's remote control device on him to ensure Weil cannot force him to not do it. This has the result of killing 20 million citizens of Neo Arcadia, and destroying the city entirely with a crater left in the middle,[4] while at the same time failing to kill Weil because of his cybernetic regenerative body. However before he can fire it again, Zero arrives and battles him as a second attack would be devastating. Zero defeats him, and before collapsing, he says he can't face Neige after what he did, and, in his last breath, he extracts a promise[5] from Zero that is similar to X's in the previous game, as well as to leave his body in Ragnarok.

Craft is a menacingly adept Reploid, capable of improvising battle tactics and stealthy maneuvers with deadly accuracy. He also swiftly moves across the field in a blurring flash, often to Zero's backside to get into position for a counterstrike.

Craft appears alongside other Mega Man Zero characters in Dr. Light's visions of the future in issue 55.

After Omega and Roze failed do defeat the new Zero, Dr. Weil hired the wandering warrior Craft to defeat him. However, during their battle, Craft developed a crush on Neige, who was accompanying Zero at the time to do an article about the Dark Elf, and after Mino Magnus interfered, Craft destroyed Magnus and left. Craft eventually became a friendly rival of Zero.

Some of Craft's early concept art. 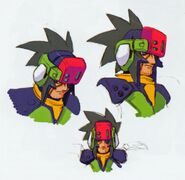 Concept art with an earlier design depicting Craft with a younger, slender body.
Add a photo to this gallery

Retrieved from "https://megaman.fandom.com/wiki/Craft?oldid=344621"
Community content is available under CC-BY-SA unless otherwise noted.