Crash Bomber, known as Clash Bomb (クラッシュボム, Kurasshu Bomu) in Japan, is Crash Man's Special Weapon in the Mega Man series. It is a "flight type injection time bomb"[1] that is launched and gets stuck to a target with a sharp point, detonating after a short delay. Dr. Wily made Crash Man's body with a thick armor to keep the explosions from hurting him.

Mega Man obtains Crash Bomber after defeating Crash Man. When equipped by Mega Man, Crash Bomber shoots a grappling bomb that sticks in walls and explodes after a few seconds. When it hits an enemy, it will simply cause a small amount damage without exploding, continuing to move forward if the target is destroyed. If the target is hit in an area immune to damage (i.e. a Sniper Joe's shield), the bomb will detonate on impact. Crash Bomber can also destroy Destructible Blocks to open passages.

Quick Man and the Wily Machine 2 are weak to this weapon. This is the only weapon that can be used against Boobeam Trap, as it is immune to all other weapons.

It can also get through Wood Man's Leaf Shield, dealing damage multiple times if the bomb explodes on the shield itself. However, this is not possible on Mega Man: The Wily Wars unless Wood Man fires his shield, as Wood Man is invincible in this game when he is shielded. A Crash Bomber fired at a wall can also deal multiple hits against Bubble Man if he's floating down near the wall when the bomb explodes. By jumping as high as possible just before he lands (be careful of the spikes), it will stop him from swimming away until Mega Man lands again.

It is possible to kill both Quick Man and Flash Man with a single well timed bomb on the Normal difficulty included in the North American and European versions of the game. The boss must be standing still while the bomb goes off for this to work. For Flash Man, he needs to be using the Time Stopper, and Quick Man must be running into a wall. Also, it is capable of destroying both forms of Wily Machine 2 in one shot, but it must be "perfectly timed" to work. The best timing is to wait for the machine to move backward then shoot it in its middle section near its weakpoint. If done correctly, it will hit an immune spot which will make the Crash Bomber explode on impact, with the explosions dealing damage multiple times. If the Crash Bomber hits the weak point directly, it will only count as a single hit and not explode.

Crash Man, Metal Man, Air Man, Heat Man, Picopico-kun and Alien are immune to Crash Bomber. If Crash Bomber is used on Heat Man, it refills all of his Life Energy.

Doc Robot can use Crash Bomber along with the weapons from the other Robot Masters from Mega Man 2, but the player cannot obtain it from Doc Robot.

Mega Man obtains Crash Bomber and Rush Coil after defeating Crash Man. Crash Bomber works in the same way as its Mega Man 2 appearance, the only differences being that Mega Man uses his throw pose instead of a shot pose and the amount of total uses was reduced due to the game's smaller weapon energy gauge. In this game, Crash Man and Crash Bomber did not had their names changed outside Japan. The weapon is named Clash Bomb on the "you got" screen and is abbreviated as "CL" on the Weapon Select Screen.

This weapon is Metal Man's weakness, and also does a good amount of damage against Quint. Air Man, Top Man, and Wily Machine II are immune to this weapon.

Crash Bomber, named Crash Bomb in this game, is obtained after defeating Crash Man in the "Mega Man 1~2" course. It is more effective against Guts Man. Unlike previous appearances, the bombs falls in an arc instead of being launched forward.

Besides normal Clash Bombs, Clash Man can also fire a large bomb from his back, which splits into smaller Clash Bombs.

The Crash Bomber is used by Mega Man in the Super Smash Bros. series of fighting games as his side special attack. Mega Man fires a bomb straight forward that latches onto opponents and surfaces, detonating after a short time. If the bomb latches onto the opponent and it gets hit by the explosion, it inflicts 8% damage. It operates identically to the Gooey Bomb found in Super Smash Bros. Brawl, as it can be passed between players before it explodes, but it has a shorter time before exploding.

In Super Smash Bros. for Nintendo 3DS / Wii U, the Crash Bomber can be customized by swapping it out for two variants: Ice Slasher and Danger Wrap. However, they must be unlocked before it can be swapped out.

Clash Bomb is one of the three weapons available to Rockman, and is also used by Clash Man. When used, it causes damage to all enemies in a 3x3 area in front of the user.

Despite Crash Man himself appearing in the animated series episode Mega-Pinocchio, Mega Man didn't obtain his weapon. In his brief appearance, Crash Man switches his drills to bombs that he only referred to as "time bombs". Upon firing the bombs, Mega Man appears and catches them, but under Dr. Wily's influence, Mega Man accidentally releases the bombs, which resumed flying forward and exploded upon impact. As Crash Man's time bombs resemble missiles in the series, it is unknown if they can stick to surfaces before detonating.

Mega Man first acquires the Crash Bomber in issue #10 after defeating Crash Man by tricking him into destroying his surroundings with it. He then finishes off Crash Man and minimizes damage to the city by using it to perform several controlled explosions. It sees use again in issue #11 when Mega Man uses it to damage Metal Man while copying his Metal Blade and in issue #12 where he and Bomb Man team up to destroy the Boobeam Trap. In a nod to the original boss fight, Mega Man ends up using all his Crash Bomber ammo at that point, similar to how the player needed a full amount to defeat that boss.

Crash Bomber is Crash Man's main weapon, which changes shape after being launched from Crash Man's body. Each Crash Bomber extends forward to form a tip which pierces its target. If the Crash Bomber senses a heat source nearby upon impact, it immediately explodes to cause direct damage. If there is no heat source located nearby, however, the Crash Bomber sets itself to detonate after a short delay.[2] The drills on Crash Man's arms aren't seen in use, appearing to be unrelated to Crash Bomber in the manga. Instead, the bombs are fired from the side of his arms, and Crash Man can also launch them from his legs, feet, shoulders, and head.

When Mega Man left the battle between the Light Numbers and Wily Numbers to stop Dr. Wily, Heat Man asked Crash Man to give him a few of his bombs, which he swallows to boost his speed and chase Mega Man, being a nod to the weapon recovering his health in Mega Man 2. 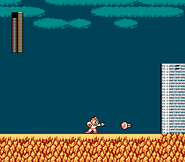 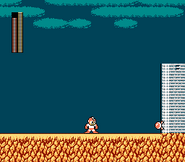 Crash Bomber, implanted on a wall. 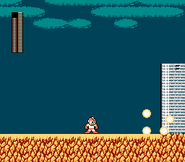 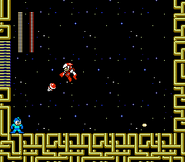 A bomb stuck on Kirby in Super Smash Bros. for Nintendo 3DS/Wii U. 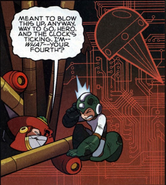