"I am the destroyer!"
—Crash Man, Mega Man & Bass database

Crash Man, known as Clash Man (クラッシュマン, Kurasshuman) in Japan, is a Robot Master from Mega Man 2 that was built by Dr. Wily using the designs of Bomb Man and Guts Man as a base with high speed and agility, the use of high explosives as primary weapons, and clad in a thick armor that can effectively withstand explosions. His Special Weapon is the Crash Bomber, powerful time bombs that attach themselves to their targets before detonating.

Crash Man is an honest, forthright individual who is usually obedient, if somewhat clumsy due to his lack of hands. However, he has a bad tendency to suffer from violent mood swings- he can be docile one moment and fly into uncontrollable rages the next, often going on destructive rampages with his bombs when angered. He enjoys demolishing buildings, but cares very little about recycling.

Crash Man is one of the eight combat robots Dr. Wily created to fight against Mega Man. If Crash Man isn't attacked, he will just run back and forth, only jumping to shoot a Crash Bomb where Mega Man is standing if shot at. So if the player runs, jumps and then shoots, Crash Man will jump up to get hit by the blast. Then just keep running so that the Crash Bomb will miss. This strategy can be done continuously until he is defeated. If his weakness, Air Shooter, is used on Crash Man, Mega Man doesn't need to jump to harm him, but only to make the Crash Bomb miss.

The second Doc Robot in Needle Man's stage copies Crash Man's moves, and before the battle, Crash Man has a cameo appearance as program data copied by Doc Robot. This Doc Robot is weak against Hard Knuckle and Top Spin, unlike the original Crash Man, Doc Robot's Crash Bombs take less time to explode, also, the explosion lasts for less time (less than half) due to having a Mega Man 3 styled explosion.

Crash Man is one of the first four bosses, and his way of fighting is similar to the one in Mega Man 2. However, his weakness, the Air Shooter, only registers one hit at a time. This means that the player has to use more shots to defeat him than in his NES appearance, and the smaller space in his boss arena makes avoiding his Crash Bombs more difficult. Mega Man gains Crash Bomber and Rush Coil after his defeat.

Crash Man is one of the six bosses from the "Mega Man 1~2" course. He attacks by throwing a single Crash Bomb, but sometimes he will jump and throw four bombs on the floor, their explosion covering a large area from the floor. His weakness is the Rolling Cutter.

In Wily & Right's RockBoard: That's Paradise, the Boss Card Clash Card (クラッシュカード, Kurasshu Kādo) can be used to summon Clash Man, who will set a Clash Bomb in one of the opponent's buildings. The bomb explodes in the next turn, downgrading the building.

Clash Man and other Wily Numbers are rebuilt by Ra Moon in the Temple of the Moon. Clash Man is the last of the eight bosses from the second game to be fought, suddenly appearing during Episode 2 to attack Rockman with all his strength. Besides his Clash Bomb, Clash Man can also attack with other weapons hidden in his body, having rapid-firing weapons in his shoulders and large-sized bombs in his back that can split into three or more Clash Bombs when hit. If the player is defeated by Clash Man, Fire Man will appear to save Rockman, giving him a chance to fight against Clash Man again.

Mega Man Legacy Collection translation: A robot with a sturdy body. He's barely even phased by most explosions. He's not too bad as long as you can dodge his Crash Bombs.

Translation: Despite appearances, he has a strong body and is unfazed by the slightest attack. He's usually well-behaved, but when he gets angry, he's out of control. (Wily says) His special weapon is Crash Bomb.

Enemies in Crash Man's stage, a large vertical stage that must be climbed.

Amount of damage in units that Crash Man receives from each Special Weapon in Mega Man 2.

"Hey, hey, step aside, Magnet Man. It's time for Crash Man to finish this job with his time bombs."
―Crash Man, Mega-Pinocchio

Crash Man appeared in the episode Mega-Pinocchio. He only appears for a brief scene when attacking the city and has only one line of dialogue, but nonetheless plays an important role in the progression of the episode. In the show, he only uses "time bombs", changing from his standard drill-like weapon to another missile-shaped explosive before firing them—suggesting that the drill-like weapons he had beforehand were his Crash Bombers, and that the time-delayed explosives he used were added for the show. He speaks with a vaguely Italian-American sounding accent, and is portrayed by Terry Klassen.

Crash Man appears in episode 20 of Captain N: The Game Master, where he and other Robot Masters from Mega Man 2 play football against the main characters. Crash Man has drastic changes in his appearance, and instead of shooting Crash Bombs, he throws cartoon-style Acme bombs from a scoop-shaped blaster. Crash Man also actually has a hand.

Crash Man was built to be a combat robot who specializes in heavy artillery. His main weapon is the Crash Bomber, which changes shape after being launched from Crash Man's body. Each Crash Bomber extends forward to form a tip which pierces its target. If the Crash Bomber senses a heat source nearby upon impact, it immediately explodes to cause direct damage. If there is no heat source located nearby, however, the Crash Bomber sets itself to detonate after a short delay. Though Crash Man's armor was specifically designed to withstand potential detonations in his immediate proximity, he is not impervious to other attacks.

Concept from Rockman Remix shows that Crash Man's arms can rotate, having hands in one side and drills in the other. Crash Man only appeared with hands in the party from "The Strongest Enemy to Date", and is never seen using his drills, which appears to be unrelated to Crash Bomber in the manga. Instead, the Crash Bombs are fired from the side of his arms and other parts of his body.

In the story "R Destruction Order", Crash Man, Metal Man and Heat Man appeared to help Air Man when he was outnumbered by Dr. Light's robots. When Mega Man went after Dr. Wily, Heat Man asked Crash Man to give him Crash Bombs, which he consumed and used as an energy boost to pursue Mega Man while the others fought against Dr. Light's robots. Later, Crash Man retreated when Wily's plan failed. He also has brief appearances in "The Strongest Enemy to Date".

In Mega Man Gigamix, Crash Man and other robots try to protect Dr. Wily from the alien robot that invaded Wily's base, but they are defeated. Later, they were repaired and appear in Dr. Light's destroyed laboratory to assist Wily, Light, Cossack, and their robots.

Crash Man was the fifth superrobot fought by Mega Man. Mega Man had no trouble dodging Crash Man's barrage of bombs and taunted him, which angered Crash Man and made him launch bombs without even aiming. Mega Man obtained the Crash Bomber after defeating him. Later, Mega Man fought Crash Man again inside Dr. Wily's Castle of Evil.

When a base is built in the city, Rockman climbs it to the top and finds Clash Man. Clash Man's Clash Bombs are quite powerful, and he is able to dodge the Rock Buster and Metal Blade, but not the Air Shooter, which is used to defeat him.

Wanting to be sure that no one will interfere with Dr. Wily's plans, Clash Man appears in the laboratory that Dr. Wily stole the time machine and sends some robots (Blocky, Shotman, and two Telly) to attack Rockman. His robots are easily defeated, and Clash Man uses both arms to attack with a Double Clash Bomb, but Rockman slides to avoid the attack and defeats Clash Man with his buster. Before shutting down, Clash Man says he isn't alone, and Rockman is attacked by Metal Man, Air Man, and Wood Man.

Clash Man is one of the members of the Wily Patrol, appearing briefly in three panels from the manga.

Front, side, and back view of Crash Man. 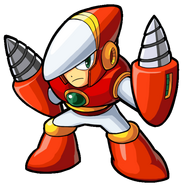 Crash Man in the cover of Archie Comics' Mega Man #10. 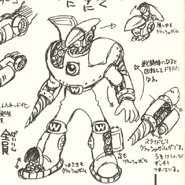 Crash Man illustration by Hitoshi Ariga for the Hobby-Rock event.