Mega Man Legacy Collection translation:
A guard robot. Destroy its body, and its head will detach and start rampaging. 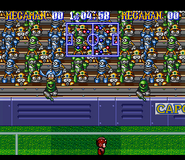