MMKB
Register
Don't have an account?
Sign In
Advertisement
in: Articles with hAudio microformats, Reploids, Mavericks,
and 6 more
English

"So, you are the famous Maverick Hunter... I never expected to see you... What an honor."
―Crescent Grizzly, Mega Man X5

Crescent Grizzly (クレッセント・グリズリー, Kuressento Gurizurī), also known as Grizzly Slash[2], is a grizzly bear-based Reploid from Mega Man X5. He is a weapons broker that sells illegal weapons from his secret warehouse in northern Siberia, Russia, and happened to have a Crystal Ball in his possession, a part necessary for the Enigma laser cannon.

Crescent Grizzly is a large Reploid with a bear-like appearance. His armor is predominantly brown in color, although his left arm is larger than the other and also red in color. He can transform this arm's claws into a drill in order to burrow through the ground. He also retains a large scar across his right eye.

Despite selling weapons, Crescent Grizzly seems averse to needless conflict, claiming that he is just a weapons dealer. He believes that both Mavericks and Maverick Hunters are the same: too violent and overconfident. Grizzly still holds a grudge against Zero for injuring him in battle, and if the player confronts him with Zero, Grizzly will directly chastise Zero for giving him the scar, saying "seeing you re-opens old wounds...". By the time the Maverick Hunters reached his warehouse to get the Crystal Ball, he was infected by the Sigma Virus and was starting to become a Maverick, wanting to die in a fight before he fully turned.

Grizzly was an arms dealer who used to live for battle while taking the best weaponry from his fallen opponents.[3] However, in later years he decided to stick only to being a weapons broker and would sell the arms to the highest bidder. This behavior was illegal, and it once put him on the radar of the Maverick Hunter Zero who gave him a scar in their ensuing confrontation, but left him alive.

Crescent Grizzly attacks by throwing three small crescent shots from his clawed hand and jumping. When a third of his energy is depleted he will burrow, appearing at times to attack: using his hand as a drill when appearing from the floor, slashing when appearing from the walls, or dropping down onto the player from the ceiling. After two-thirds of his energy is gone he will stop burrowing and use giant crescent attacks. Some walkthroughs recommend defeating him first as he can be easily dealt with using default weapons. His weakness is Spike Ball if playing as X or Twin Dream if playing as Zero.

Crescent Grizzly: So, you are the famous Maverick Hunter... I never expected to see you... What an honor.
X: We have no time to fight you. Just give me the Crystal Ball...
Crescent Grizzly: The virus is already taking control of me... Soon I'll become one of the Mavericks... We are destined to fight anyway... Fight me while I'm still conscious! I don't want to waste you when the Virus has taken control!
X: I understand your situation, but we don't have time! Please understand! We're dealing with the fate of the entire Earth. We can't waste time fighting you...

Crescent Grizzly: Everything is meant to be... No one can escape their destiny... I'm sure you know that, too. Besides, this is part of your mission, isn't it? Now! Fight me, Maverick Hunter!

Crescent Grizzly: Zero! Seeing you re-opens old wounds...
Zero: You should have that looked after. I don't have time for small talk. Give me the Crystal Ball...
Crescent Grizzly: Why don't you do what you usually do, and force me to? You used to be a Maverick, right? That's what I heard. And, you destroyed Sigma, didn't you?
Zero: What, that old story...? If you dare to try and fight me, then I accept your challenge anytime, anywhere.
Crescent Grizzly: Hunters and Sigma are very similar. Very aggressive and overconfident.
Zero: What? We're nothing like that scum!

Crescent Grizzly: Oh yes, you are... I'm just an arms dealer... But you... You destroy anyone who stands against you. Now I'm going to make you pay for what you did to me, Maverick Hunter!

Crescent Grizzly: So, you're the famous Maverick Hunter... I never expected to see you... What an honor. I don't understand why you bother coming here in this situation, but... As you can see, I'm already infected by the virus... Soon, I'll become one of the Mavericks... Anyway, we are destined to fight. I want to fight you while I'm still conscious! Come on, fight me now, Maverick Hunter!

Crescent Grizzly: Zero! Seeing you re-opens old wounds... Hey, you look depressed... What, did you make a mistake, or something? Even the Hunter who destroyed Sigma makes mistakes! Ha ha ha!
Zero: Your childish antics grow tiring. If you dare to fight me, then I accept your challenge: Anytime, anywhere.


Crescent Grizzly: I'll make you pay for what you did to me, Maverick Hunter!

Crescent Grizzly was amongst the many Mavericks revived by Sigma-1 during the Worlds Unite crossover event, identified by his Japanese name instead of his American name. When he and his fellow comrades are weaking the Unified Army, he attacks Axl.

Crescent Grizzly appeared in the Rockman X5 manhua. In the manhua, he is the big boss leader of smaller bear Reploids similar to himself. His personality seems to be that of a hot-tempered foreman. At the beginning of the first chapter, he and some of Dark Necrobat's henchmen are holding one particular human hostage, crucifying him for everyone to see. Other humans speak out against the cruel treatment and insult Grizzly, who loses his temper and attacks the crowd with crescent slashes. As he is about to crush a little girl with his fist, X intervenes and stops him. 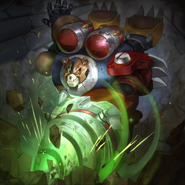 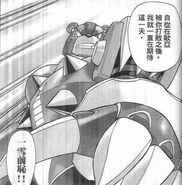 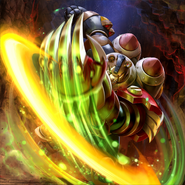 Crescent Grizzly in the start of the stage

Developer Comments
Actually, he started off as a pig. (grin) I wanted to make him a largish boss, so I'd established him as a pig with poison gas, but I was worried over how ethical poison gas would be as a weapon [Cultural impact: Remember that subway incident?], so I scrapped that idea. (sweat) He's the first boss, but I wanted him to be big and impressive, but all bark and no bite, so I got some feedback from my seniors here and decided to make him a bear. The instant I decided on a bear, I easily figured out his attack methods and name.[4][5]

Designer Comments
He's a bear and a drill besides. (His red hand transforms.) Working from that, there was no way he couldn't look powerful. That's why I tried emphasizing his drill arm by painting it red. Being that he's a Japanese bear [lit., "Ring-around-the-Moon bear"], I was lost as to how to work in the moon marking, but I eventually inserted it as part of the structure around his neck.[4][5]

I drew Grizzly to look like a construction foreman; the kind of guy you'd want to call "Boss!" He has heavy machinery on one hand, and has a neck like a log from working out. -Haruki Suetsugu, Mega Man X Official Complete Works, 2009[1]