The Crimson Dragon (クリムゾン・ドラゴン, Kurimuzon Doragon) is the final boss of Mega Man Star Force 3, and the embodiment of the core of Meteor G.

At the end of the Meteor server, Mega Man finds the core of the Meteor and Mr. King fuses with the core, forming the Crimson Dragon. It then absorbs Kelvin Stelar, and Mr. King plans to use its power to destroy the world. Mega Man then fights the Crimson Dragon and defeats it, ejecting Mr. King. The Dragon still exists, however, as it is tapping off Kelvin to stay materialized. The Dragon goes rampant and unleashes a desperation attack, knocking Mega Man out cold due to the sheer level of noise.

While blacked out, A.C. Eos appears, and tells Mega Man not to give up, and that everyone is waiting for him, their hero, to return to Earth. Mega Man then gets up, enters his Finalized Noise (varies with version), and fights the Crimson Dragon a second time. As the Crimson Dragon is destroyed, Meteor G self-destructs, releasing Mega Man and Kelvin in the process.

During the battle with the Crimson Dragon, cards such as Area Eater and Double Eater will have no effect. Its weak spot is the core, which is being blocked by its main head. Damaging its head enough will cause its head to phase into two heads, exposing the core. The individual heads can be damaged and destroyed, but they will regenerate. After some time of exposing the core, the two heads will phase back to form the main head again. It cannot be damaged when the heads are materializing.

Crimson Meteor, known as Meteor of Crimson (メテオオブクリムゾン, Meteor of Crimson) in Japan, is an event only Giga Class Battle Card that summons Crimson Dragon to attack all panels twice. In North American it was available for a time on the Wii's Nintendo Channel's DS Download service and in DS Download Stations. In Japan it was distributed in the Jisedai World Hobby Fair '09 Summer.[1] 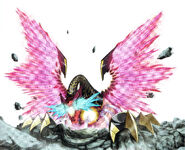 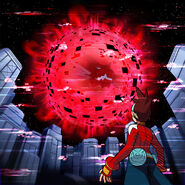