The Cross System (クロスシステム, Kurosu Shisutemu) is a transformation system introduced in Mega Man Battle Network 6 that allows one NetNavi to use the powers of other NetNavi. In the game Mr. Match (Gregar version) / Shuko Kido (Falzar version) teaches this new system to Lan Hikari. The Cross System also appears in the Rockman.EXE Beast+ anime, but only Aqua, Elec, Ground and Tomahawk Crosses appear in the episodes of the series.

The Cross System is similar in concept to the Double Soul (Soul Unison) from previous games, in that MegaMan gains traits of other NetNavi (here called a Link Navi), but it does not use any Battle Chip sacrifices, can be initiated at any time during the battle, and may last for the entire battle unless MegaMan is hit with an attack the Cross is weak to, in which case he takes double damage and loses the cross for the rest of the battle. Every cross now has a weakness, as four of the other attacking chip types (Wind, Sword, Break and Cursor) now have their own cycle of weaknesses (Wind→Cursor→Break→Sword→Wind).

Additionally, a player can "Cross Beast" by using a Cross in Beast Out or vice versa. It carries the same capabilities, but the Mega Buster has been replaced with the rapid-fire Beast Busters, and it can charge non-element chips to perform a devastating attack. If timed correctly, triggering a Cross can allow players to get out of a stun or out of a rapid, consecutive hitting attack launched by an opponent.

Interestingly, the Cross System doesn't change MegaMan's foot design, but the color only. For example, Double Soul Tomahawk Soul changes MegaMan's foot with squared design, while the Tomahawk Cross only changes the color to blueish green.

Crosses here are more gimmicky and focus on status effects. 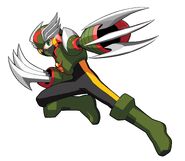 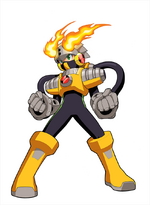 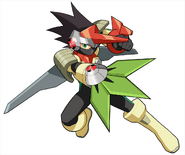 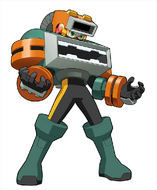 Dust Cross
Add a photo to this gallery