Crusher (クラッシャー, Crusher) is a demolition robot that appears as an enemy in the Opening Stage from Mega Man X and Mega Man Xtreme. When a Crusher hits part of the highway with its spikes, it actually drills a hole through that section. It cannot drill the pillars. Once it is destroyed, the spikes will fall down onto a part of the highway.

Amount of shots/hits from Special Weapons it takes to destroy a Crusher.

Crusher NEO is a modified Crusher that appears in the Opening Stage of Mega Man X5. Immobile, invincible versions also appear in the middle of the second Zero Space stage.

Crusher appeared in the Rockman X manga and Worlds Unite, aiding Sigma in his plan to unite all worlds in the latter. 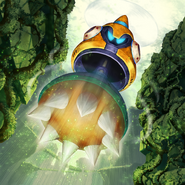 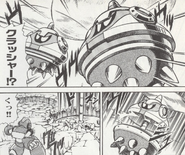 Criusher in the Rockman X manga

Crusher in Worlds Unite
Add a photo to this gallery

Retrieved from "https://megaman.fandom.com/wiki/Crusher_(enemy)?oldid=316705"
Community content is available under CC-BY-SA unless otherwise noted.