Crystal Man (クリスタルマン, Kurisutaruman) is a Robot Master from Mega Man 5 that was created by Dr. Wily predominantly to help finance his operations through the creation of artificial crystals to sell. He can use his ability as a Special Weapon, the Crystal Eye, which allows him to attack by instantaneously producing and launching barrages of crystal orbs that can rebound off surfaces and split into multiple smaller orbs when they hit their targets. He can also attack with energy shots from the crystal in his body.

A mysterious, mystical individual who prefers to keep to himself most of the time, Crystal Man is skilled in the art of illusion and Fortune-telling, something of an allegory to the crystals he produces resembling the crystal balls often used by fortune tellers. His colleagues have a hard time trusting him, though, and he has a dislike for scientists.

Crystal Man jumps repeatedly, sometimes stopping in mid-air to attack. If he stops in mid-jump, he will shoot an energy shot. To avoid it, the player should stand below him and slide to the side Crystal Man came when he is about to fire the energy shot, then shoot at him as much as possible. However, if he stops in mid-high jump, he will use the Crystal Eye by summoning four crystal orbs that are difficult to avoid, but can be done by the player having Mega Man stand near him in a way that the orbs that go to Mega Man's side go above him, and sliding or moving to avoid the rest while also dodging Crystal Man. The best way for the player to defeat him is to stand as close to him as possible, sliding to the side he comes and avoiding his attacks while shooting at him when he lands.  Note that Crystal Man always begins his battle by using Crystal Eye.

His weakness, which defeats him in seven hits, is the Gyro Attack, as it eliminates the need of standing near him and shooting when he lands, but requiring the player to jump when he is about to fire the energy shot. The player has to also make sure to press UP to make the Gyro Attack go up, timing it so it successfully hits Crystal Man.

Translation: A robot composed of crystal materials. His Crystal Eye is difficult to avoid, so take him out early with the weapon he is weak to.

Mega Man Legacy Collection text: A robot made up of crystals. His Crystal Eye is hard to dodge, so take him down quickly with the weapon that plays on his weakness.

Displays the amount of damage in units that Crystal Man will receive from each Special Weapon in Mega Man 5.

*For Mega Buster, the first number is when the weapon is fired normally; the second is when it is fully charged.

"Perhaps I did not make myself...crystal clear."
―Crystal Man, Episode 12: The Mega Man in the Moon

Crystal Man appeared in the episode "The Mega Man in the Moon", from Ruby Spears' Mega Man animated series. He is shown to be the most powerful and competent of the Robot Masters in the episode. He takes command of Cut Man and Guts Man in Wily's absence, and nearly kills Mega Man twice: first by trapping him under a launching space shuttle, and later inflicting what could be considered the most devastating blow against him by shooting him with Wily's augmented laser cannon.

When Crystal Man has his Special Weapon stolen by Mega Man, he fights back (being one of only two Robot Masters to do so, the other one being Pharaoh Man) by pushing Mega Man over, before jumping into the air and trying to stomp on him with the Moon's low gravity, only to be shot down by his own weapon. Crystal Man is shown to survive afterwards, albeit badly damaged, and is last seen vowing to have his revenge.

Crystal Man was voiced by Jim Byrnes, the same voice actor as Dr. Light. Like the other Robot Masters from Mega Man 5 featured in the show, Crystal Man appeared nearly identical to his design from the video games, with only minor stylized changes.

Like many of the Robot Masters, Crystal Man debuts prior to the comic adaptation of his game, specifically during the Worlds Collide crossover with Archie Sonic the Hedgehog. He appears as part of a large army of Robot Masters, time-cloned from various points in Mega Man's history by Dr. Wily and Dr. Eggman. Crystal Man and his fellows battled Sonic the Hedgehog and Mega Man's allies, who despite being vastly outnumbered put up a strong fight. Notably, Crystal Man launched an attack at Espio the Chameleon only for the ninja's shuriken to slice right through his crystal.

Crystal Man made his formal debut in Mega Man #53, seen incomplete and hanging on a wall while Wily examined some plans.

Crystal Man is a combat robot that was built with natural crystals, and is able to utilize them to create artificial crystals through hydrothermal processing. Through his research on the creation of crystals, Dr. Wily developed half-gelatinous crystals which he further refined into the weapon known as the Crystal Eye. This weapon fires a large crystalline ball containing numerous smaller crystal balls, which scatter on impact.

Crystal Man first appeared in the story "Holiday of Soldiers," where the eight Robot Masters from Mega Man 5 have part-time jobs at an amusement park to obtain money for Wily, referring themselves as "The Hourly Pay Squad: Part-Timers" and Crystal Man as "Crystal Sky". Crystal Man runs a Yakisoba stand. 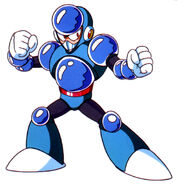 Front, side, and back view of Crystal Man.

Crystal Man in Mega Man: Upon a Star.

Crystal Man in Mega Man: Upon a Star.

Crystal Man in the Rockman 5 manga. 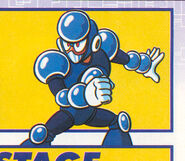 Crystal Man being contruscted in the comics.

Crystal Man and other Robot Masters being constructed in Dr. Wily's lab.

Retrieved from "https://megaman.fandom.com/wiki/Crystal_Man?oldid=315351"
Community content is available under CC-BY-SA unless otherwise noted.