Crystal Snail, known in Japan as Cristar Mymine (クリスター・マイマイン, Kurisutā Maimain), is a snail-type Maverick in Mega Man X2. His origins and motives are a mystery; regardless he guards the Energen Crystal mine under Sigma's command.

Besides using Crystal Hunter, Crystal Snail also uses his shell to his advantage. His weakness is Magnet Mine, which knocks him out of his shell. Once he is out of his shell, the player can dash at it to knock it away. Snail will try and follow it; the player can essentially play keep away with him for the entirety of the battle. If Snail and his shell collide with each other, he will receive double damage.

A unique trick can be utilized in this battle: place a Magnet Mine on the wall behind X, and then shoot another mine at Crystal Snail — not only will it knock him out of his shell, but he'll fly right into the other mine.

Crystal Snail appeared in the Mega Man comics, specifically in the Worlds Unite crossover event that saw Mega Man X characters appear in the Archie Mega Man series and interact with characters from Archie Sonic the Hedgehog, Sonic Boom, and various other Capcom and Sega franchises such as Street Fighter and Alex Kidd. He appeared as part of an army of Mavericks sent to conquer various worlds. 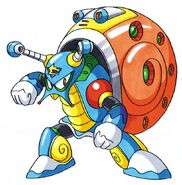 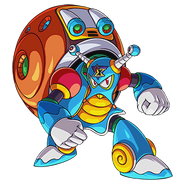 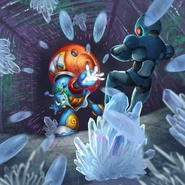 Retrieved from "https://megaman.fandom.com/wiki/Crystal_Snail?oldid=310071"
Community content is available under CC-BY-SA unless otherwise noted.