Cubit Foxtar (キュービット・フォクスター, Kyūbitto Fokusutā) is one of the bosses of Mega Man Zero 3. Foxtar is one of the Eight Gentle Judges modified by Dr. Weil into his Weil's Numbers, a Mutos Reploid based on a kitsune, the nine-tailed fox. Cubit has nine remote control options to attack and can create flaming mirages, preferring to use strategy to defeat enemies instead of physical fights. Foxtar looks down on Tretista Kelverian and Deathtanz Mantisk with contempt due to their brutal fighting skills. Before his creator "upgraded" him, he was strict but kind, as shown when conversing with Childre Inarabitta after Elpizo's trail. When Dr. Weil returned and upgraded him however, he was mocking and cruel, saying that Weil's upgrade was "libertaing", showing that he liked his real personality and not the other one. 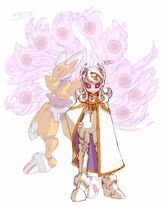 Retrieved from "https://megaman.fandom.com/wiki/Cubit_Foxtar?oldid=298181"
Community content is available under CC-BY-SA unless otherwise noted.