Cut Man's Stage (カットマンステージ, Cut Man's Stage) is a stage that has Cut Man as its boss. It appears in the first Mega Man game, its remake Mega Man: Powered Up, and Mega Man: Dr. Wily's Revenge.

Cut Man's stage was developed as an easy stage that is helpful for beginners to practice,[1] and most enemies are easy to defeat or avoid. The stage design is also simple, having green bricks, gray walls, and a turquoise sky, being primarily set outdoors. The Mega Man: The Wily Wars version of the stage is primary set indoors, with large windows showing the sky.

In New Style, Cut Man's stage was modified, and some sections can only be accessed by specific characters or weapons. When playing as Cut Man in his own stage, Mega Man? will replace him as the boss. The stage contains several logs and trees.

In Construction mode, the Scenery Packs Cut Starter, Cut Extra, and Old Cut are based on Cut Man's stage.

Cut Man's stage is set indoors, in an area with pits and conveyor belts.

In issue 2 of the Archie Comics Mega Man series, Cut Man, having been reprogrammed by Dr. Wily, took over an old facility. Mega Man is teleported to the facility after Guts Man's defeat, and defeats Cut Man with the Super Arm.

After defeating Guts Man, Mega Man is attacked by Dr. Wily's robots in an area of the city that was abandoned, and encounters Cut Man in the area, defeating him. 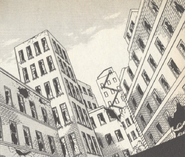 Abandoned city in the Rockman manga.
Add a photo to this gallery

Retrieved from "https://megaman.fandom.com/wiki/Cut_Man%27s_Stage?oldid=306656"
Community content is available under CC-BY-SA unless otherwise noted.