Cyber-elves (サイバーエルフ, Saibā Erufu, romanized Cyber Elf in Japan) are a unique feature of the Mega Man Zero series. Each Cyber-elf is a sentient computer program created with pure energy and made in the image of anthropomorphized entities, from animals and objects, to even human occupations and mythical beings, and these appearances are also significant of their abilities and capabilities as a living form of software. Within gameplay, they aid Zero to enhance his abilities or provide temporary benefits (such as healing his life gauge, providing cover fire or raising his Rank to A).

Cyber-elves are self-aware, which means they can think, feel and communicate. However, Cyber-elves are better known for their ability to support a Reploid in combat with their special abilities. There are different types of Cyber-elves and most of them can grow and evolve by feeding them Energy Crystals. As Cyber-elves evolve, their abilities are also enhanced, and some of them can only be used after evolving. However, many Cyber-elves can only be used once since their energy is depleted upon activating their ability. Since their bodies are made of energy, this results in the death of those Cyber-elves, who disappear and cannot be revived, making the ethics in their use questionable. In the games, this also penalizes the player's mission score upon clearing stages.

The Cyber-elves function by interacting with Cyberspace, a parallel world where everything in the "real" world (referred to as "substance world") exists in the form of a program. A Cyber-elf manifests its power by altering the program of Cyberspace, causing changes to the substance world. It is through this process that Cyber-elves can accomplish feats such as increasing a Reploid's power, repairing damage, or even environmental changes such as the removal of local hazards or the transformation of certain Mechaniloids.[1]

Although Cyber-elves vary greatly in appearance, they are generally identified by a simple pair of wings. Due to their small size, they are depicted in the games as tiny balls of light. Also, since they are living data, Cyber-elves can be transferred and downloaded through devices such as Trans Servers.

In the Mega Man Zero series, Cyber-elves are generally unknown to humans since they are only visible to Reploids,[2] with the human Ciel being able to interact with them due to special equipment used by her. In the Mega Man ZX series, however, humanoids (humans who receive bionic bodies at a certain age) are able to see Cyber-elves, although most people remain unaware of their existence.

Most Cyber-elves have one of the following main types:

Cyber-elves are known to pre-date the Elf Wars, at least one century before the events of the Mega Man Zero series. One of the most notable uses of a Cyber-elf is X's employment of the Mother Elf's ability to cure the Mavericks infected by the Sigma Virus. However, the later misuse of the Cyber-elves would mark the Elf Wars; In particular, the use of the gigantic Dark Elf and its child like copies, the Baby Elves, intensified the violence. They were used by Dr. Weil to not only amplify the abilities of every Reploid, but to place them under his direct control, which turns them into Mavericks and force them to fight each other in a brutal series of battles. The Dark Elf herself was also intended to be used in Dr. Weil's Project Elpizo, a plan to combine the Dark Elf's power with Omega to control every Reploid on Earth. Dr. Weil's ambition was stopped by X and Zero, who worked together to capture the Dark Elf, defeat Omega and delete the Baby Elves.

Because of the use of Cyber Elves, with the Dark Elf in particular, the war lasted only four years yet it had dire casualties: approximately 90% of all Reploids and 60% of all humans. One century after the Elf Wars, X, who had become the leader of Neo Arcadia, would turn into a Cyber-elf himself upon sacrificing his own body to keep the Dark Elf sealed away in Yggdrassil. In the process, his own soul was split into five Cyber-elves; one retained X's consciousness while the other four were used to create the Four Guardians.[2] X was then replaced by Copy X to cover up his disappearance.

Years later, Zero's awakening is made possible by the Cyber-elf Passy, who sacrificed herself to restore the legendary Reploid in the Forgotten Laboratory. After saving Ciel, Zero fights to protect the Resistance from Neo Arcadia, which has been acting on orders from Copy X to destroy Reploids due to a serious energy shortage. With support from the original X, who does his best to help his friend even as a Cyber-elf, Zero is successful in defeating Copy X.

One year later, the Resistance has been joined by Elpizo, who gives Ciel one Baby Elf stolen from Neo Arcadia's vault for study. With Zero's assistance, the Resistance succeeds in stealing a second Baby Elf from the ruins in the Forest of Dysis. Named Crea and Prea by Alouette, the two Baby Elves are later retaken by Elpizo to assist the release of the Dark Elf after the disaster of Operation Righteous Strike. Although X tries to help Zero stop Elpizo, the ex-Resistance member manages to breach Yggdrassil and destroy the seal. Elpizo then uses the Dark Elf's power to fight Zero, but he is defeated after a heated battle. However, the Dark Elf appears to feel compassion for Elpizo as he acknowledges his misdeeds and saves his life by transforming him into a Cyber-elf before departing.

After a few months, the Dark Elf is recaptured by Dr. Weil, who returned from exile with Omega to repeat what he had attempted in the Elf Wars. After manipulating a revived Copy X to return to Neo Arcadia, Dr. Weil manages to combine the Dark Elf with Omega as Crea and Prea hinder Zero's efforts. However, the original X protects the Resistance Base from Dr. Weil's control, allowing Zero (who is immune to the effect) to track down Omega and defeat him once and for all. X vanishes soon after Omega's destruction, having spent all of his remaining energy. The Mother Elf, who was finally freed from Dr. Weil's curse in the final battle, returns Zero to the Resistance Base and leaves for parts unknown.

Aside from the Cyber-elf that Zero receives from Alouette, the game also features an ancient research lab containing failed experiments from the Elf Wars such as the scrap elves.

The first sight of a Cyber-elf occurs when Girouette dies at the hands of Serpent, the president of Slither Inc.. As Girouette leaves Biometal Model Z behind for the protagonist (either Vent or Aile), his body vanishes as he becomes a Cyber-elf and drifts away. However, the presence of Cyber-elves is only confirmed when it is possible through the use of technology to artificially transform humans into Cyber-elves, it is discovered that Serpent harvested Cyber-elves for energy in a power plant, and that Cyber-elves with data on fear are the key to awakening Model W. Upon rescuing innocents held captive by one of Serpent's Pseudoroids, one of them explains that the Mavericks were stealing their memories and terrorizing them before turning them into Cyber-elves.

During the final confrontation, Serpent uses a large quantity of Cyber-elves gathered in the head office of Slither Inc. to feed the Model W core, and ultimately merges with it to transform into a mechanical monstrosity. When Serpent is finally defeated and the Biometals rescue the protagonist from the fallout, Girouette appears as a Cyber-elf for a final conversation.

There are also Cyber-elves in the background of Area E-5, which are used to generate power, and disappear after the defeat of Hivolt the Raptoroid. Although Cyber-elves themselves are not actually seen years later, the efforts to awaken Model W continue as the antagonists feed the fragments with their terrified victims, ultimately leading to the creation of Ouroboros planned by Master Albert.

Zero appears in his design from the Zero series as a playable character, and his moves include the ability to summon a few Cyber-elves to attack the opponent; although these Cyber-elves are unnamed (except for Zero sometimes saying Morick, Tielar, Areff, Bompa, Beesus, and M-orell), their designs are all based on elves from the first game.

During Dr. Light's visions of the future in issue #55 of the Elf Wars, a Cyber-elf of Dr. Light himself can be seen next to X. This suggests that in this continuity, the Light hologram from the Light Capsules has been converted into a Cyber-elf. X's Cyber-elf form can also been seen on the page depicting the events of the Mega Man Zero series.

The Mega Man Zero series also features a number of Cyber-elves that cannot be used by Zero (i.e. the player). The majority serve only to further the plot of the game and as such serve no other real purpose. Two of these Cyber-elves only appear in an e-Reader Modified Game. 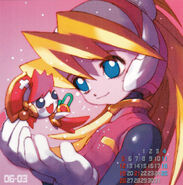 Ciel and a Nurse Cyber-elf

Zero and Kwappa in the Rockman Zero manga

Cyber-elves in the Zero & Ciel card from the Mega Man Trading Cards.
Add a photo to this gallery

Retrieved from "https://megaman.fandom.com/wiki/Cyber-elf?oldid=314450"
Community content is available under CC-BY-SA unless otherwise noted.