The Cyberworld (サイバーワールド / 電脳世界, Saibāwārudo / Dennōsekai, used in the Mega Man Battle Network and Star Force series), or Cyberspace (サイバースペース / サイバー空間, Saibāsupēsu / Saibākūkan, Mega Man X and Zero series), is an alternate dimension featured in the Mega Man franchise. As its name implies, it is a digital world created through the advanced technology of the series.

The characteristics for the Cyberworld vary to almost nothing for both series, but rather their difference is based in the relevance it has for each series. It is a digital space created via computers whose main purpose is to ease the life of people as well as for researching in laboratories, similar to the real-life Cyberspaces, however considering the timeline of the series it is to know that the Cyberworld is to be considered far more advanced and reliable, although not 100% safe, as it can also be attacked by bugs and viruses as any source of data. The major difference between the Cyberworld of the series and that of the real world is the ability to be able to literally travel to the Cyberworld, in other words to be able to be digitalized and become data to be in the Cyberworld itself. However this trait is mainly used when a network is attacked by dangerous viruses and/or bugs, thus digitalizing the most capable fighters to get rid of them as being deleted in the Cyberworld is by all means dangerous and can be fatal, thus hinting that only capable fighters are able to survive while digitalized. It is also possible for data to be materialized in the real world, but this requires incredible power and intellect.

The Cyberworld does not really appear in the main series until later in 21XX. The Cyberworld appears as mission stages when Maverick viruses (arguably digitalized Maverick Reploids) attack facilities' network and as such the player must be digitalized to destroy the threat. In Mega Man Xtreme the Cyberspace is featured when Techno hijacks data from the Hunter Base and recreates Maverick Reploids. Data can also be materialized from the Cyberspace into the real world, the Sigma Virus itself being an example of such, being able to be seen and attack, as well as materializing Mechaniloids, however materializing data requires extraordinary power, and as such it is not a capacity totally exploited in the series. Magna Centipede's stage is a Computer Center where everything is run by its network, such as the security system and the sensor system which appears in an incredibly large room in which boulders fall and the player must avoid to be locked-on otherwise it will give power to the sub-boss Raider Killer.

The later trait of the Cyberspace is in Mega Man X4, where the player must face Cyber Peacock and the stage itself is an area of the Cyberspace, in which the player is given a limited amount of time to avoid bugs and digitalized Mechaniloids in order to reach to a warp point. Shall the player score an S rank it will have access to a hidden area with prizes. Manipulation of time and space is seen in this world as the player can press a button to literally put the world perspective in reverse (what was considered floor now is the ceiling and vice-versa).

The final stages of Mega Man X5 are in an area called Zero Space. Backgrounds, both in-game and in cutscenes, show evidence that it is a cyberspace-like area. It is unknown what happened to Zero Space after the events of the game.

A major trait of the ability to materialize data into the real world is seen in Mega Man X6, in which Gate is able to create and materialize the Nightmare Virus which antagonises most of the game, as well as the feature to alter the real world as it is often in stages how the Nightmare Virus can create bizarre phenomena such as raining fire balls, materialization of metal cubes, determinated areas-freezing, attraction of fly Mechaniloids, almost complete darkening, materialization of ground masses, etc.

In Mega Man X7, a Cyber Field is the stage for the mission of Snipe Anteator, the stage features unbreakable barriers (possibly some sort of Fire Wall) only bypassed by Axl's copy ability of Mushadroyds (possibly meaning that the "Fire Walls" only allow "recognizable" data, while rejecting others, the other copy-able Mechaniloids possibly serving as bugs) the user can also alter the gravity by jumping in specified platforms in which the player can literally play head-down.

Cyberspace appears in Mega Man Zero 3 as an optional area that serves as a "shortcut" throughout the level. Entering Cyberspace tints the area (besides Zero, enemies, and items, who remain their normal colors) green and also prompts the activation of all Cyber-elves with an "A" mark on them that Zero has, even if they haven't fully grown. The effects from these elves have no negative repercussions on the mission, but five mission points are lost as penalty for entering Cyberspace. Also, Secret Disks can't be obtained in Cyberspace, and Zero must leave Cyberspace before boss rooms.

Cyberspace is mentioned by Hirondelle to be a rift caused by the appearance of Omega on Earth, with doorways to this space appearing in several areas. It also seems to act as something of an afterlife for Reploids, as well as a general area where all computer data is gathered, given enough time; in the Sub Arcadia stage, Phantom can be confronted (and fought) to obtain the Ultima Foot Chip, and before the fight reveals that he's accessed data in Cyberspace and "learned the truth" about Zero and Omega.

If players trade data between Mega Man Zero 3 and Mega Man Battle Network 4 in Ciel's laboratory, most enemies encountered in Cyberspace will be replaced by viruses, aerial enemies becoming a Swordy, ground enemies a Beetank, and aquatic enemies a Puffy.

In Mega Man Zero 4, Cyberspace plays a small role in the Teleporter Circuit stage where Zero is transfered as program data into Ragnarok's circuit to destroy the security systems, thus allowing him to teleport inside Ragnarok. While inside, it superimposes visuals on the circuits so Zero can tell what's going on, allowing him to navigate from the Teleporter Base to Ragnarok via something akin to Cyberspace. The boss of the stage is the security system itself, Cyball. Although similar, this Cyberspace is not the same Cyberworld from Mega Man Zero 3, but an "electronic space" (電脳空間, "electronic space") similar to the Mega Man Battle Network series.[1] While the Cyber-elf system from Mega Man Zero 4 is different, Cerveau notes that in the Teleporter Circuit Cyber-elves won't automatically activate.

A major trait of the Cyberspace materialization into the real world is shown by the Cyber-elves, AI creatures which are able to materialize in the real world and each one having special powers the player can use.

The Cyberworld in the Mega Man Battle Network series is the basis for the day-to-day life as the whole society is run by computer networks, mainly the internet, thus being extremely important for every system in the world to be able to function properly. Programs and NetNavis are the main "population" of the Cyberworld, artificial intelligences that maintain the world and makes electronics functional. NetNavis also serve as AI programs which emotions and their own intelligence however most of them serving humans preferring co-operation (similar to how Reploids are in the main series). The network though very stable is never fully rid of viruses, thus NetNavis are each in some point made for combat of viruses though this applies for "weak" viruses. For maintenance, a person can jack in stronger NetNavis to a computer (電脳, dennō, short for 電子頭脳, lit. "electronic brain" or "computer", also translated as "cyber" and shortened as "comp") and use Battle Chips to support the Navi. Battle Chips contain programs that both a Navi and virus can use alike to materialize (in the Cyberworld) blades, guns, flamethrowers or any kind of weapon and phenomena alike.

Differently from the main timeline's Cyberworld, in this one there are two kinds of deletion. The one is the basically fatal-like deletion in which any deleted Navi or virus is to fully cease to exist and the other deletion is the "deletion" through "friendly combat" in which NetNavis fight each other as some sort of sport, in this case deletion never causes a Navi to be destroyed but rather be exhausted and unable to fight until being restored. When deleted, a Navi can be restored with backups, and powerful Navis leave behind junk data that resembles a ghost.

The Cyberworld is featured in every game as the main plot of the games involve the players getting themselves in the "need" to check the source of problems when a virus, bug, Hijacks an specified network thus wreaking havoc (normally being lead by a Navi operated by a hacker or any kind of Cyber criminal). In this Cyberworld bugs are almost never shown as enemies but rather as energy/money sources the player can use for more powerful accessories.

"The central-most part of an electronic device. Normally, EM bodies can enter Cyber Cores, but some Cyber Cores are access-restricted because of maintenance, etc."
—Mega Man Star Force 3 description

The Cyberworld is replaced by the Wave World, a world made of EM Waves. The ability to materialize into the real world is never shown at all, but it is rather that people can "see the EM waves" than an EM body being in the real world itself. The EM world has almost no differences with the Mega Man Battle Network series Cyberworld, and has the same functions and importance.

Although its role was reduced due to the replacement of the internet, the cyberworld from electronic devices are still present in the series, being named Comp Space in the first two games, Cyber Core (generally abbreviated as CC) in Mega Man Star Force 3, and dennō (電脳, dennō) in Japan. EM bodies can Trans In to access a Cyber Core from the Wave Road.

An entrance to Cyberspace in Mega Man Zero 3

When Zero enters Cyberspace, most Cyber-elves with him will activate 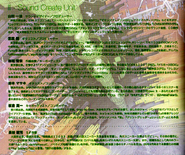 Retrieved from "https://megaman.fandom.com/wiki/Cyberworld?oldid=308020"
Community content is available under CC-BY-SA unless otherwise noted.