Cygnus (キグナス, Kigunasu) is an FM-ian from the Mega Man Star Force series based on the constellation Cygnus, the swan.

In Mega Man Star Force, Cygnus arrives on Earth searching for a compatible human host. He discovers Tom Dubius, who had been betrayed earlier in life, and is afraid to make a BrotherBand with his boss, Aaron Boreal. Soon, a misunderstanding happens between Aaron and Tom in which Tom gets convinced that Aaron has betrayed him and taken his ideas for his own. Cygnus sees this, and so he uses EM Wave Change with Tom to become Cygnus Wing, with the plot of destroying Aaron. When Mega Man defeats him, Tom still believes that betrayal is the essence of society, and asks Aaron to prove that it isn't by taking off his helmet in a zero-oxygen, zero-gravity area. Aaron trusts Tom and therefore removes the helmet, to discover that Tom had filled the area with oxygen.

Having been proven wrong, Tom forces Cygnus away. Cygnus returns three times later in the game: first, he appears as an EX encounter in a dead end of the Lab EM road, then later as a random SP encounter, and finally he appears in the first Comp leading up to the final boss Andromeda, where Mega Man must fight him in his EX form. Each time, he assumes the form of Cygnus Wing even though he is not fused with Tom.

Cygnus reappears in Mega Man Star Force 3 as Tom's Wizard, and can be challenged in the WAZA Center. He also appears as a Noise Change for Mega Man.

Cygnus makes a role as a major antagonist of the first half of the first season, leading the FM-ian group to chase down Omega-Xis and obtain the Andromeda Key he's stolen. Cygnus manages to track Omega to Earth and overpower him, before the latter goes in hiding. To track him down once again Cygnus required a compatible human host, which happened to be Tom Dubius. Cygnus sabotaged his car, crashing him and offering his help for Tom to survive the accident. At AMAKEN Cygnus inflates Tom's distrustful nature and turns themselves into Cygnus Wing to destroy AMAKEN Lab and Mega Man, coming there to help. Cygnus Wing uses Tom's plan to crash an inactive satellite on the Lab where he's confronted by Mega Man. When he's reminded of Geo's kind attitude towards Tom, he manages to restore control of his own, yet Cygnus proves to be stronger and forces him back into Cygnus Wing form and retreats.

While in hiding, Cygnus creates a machine able to revert FM-ians into EM Wave Change form without a human host once one is found. One of the last details he obtains at AMAKEN, while threatening Aaron Boreal and revealing Mega Man's identity to him. Due to Tom's long exposure to Cygnus, Cygnus Wing becomes way stronger than before and he cannot be surely defeated without harm to Tom, which makes Geo hesitant to fight him and allowed Cygnus to overwhelm him, at the same time shaking his bonds with Omega, revealing that the latter led the attack on Geo's father's space station.

Cygnus gathers the other FM-ians and together they are able to trap Omega-Xis and return the Andromeda Key which they intend to use to summon Andromeda. Cygnus controls Andromeda on its way to the Earth core while the others fight Mega Man. However, Cygnus is betrayed by Gemini Spark who want the power of themselves to overthrow king Cepheus. Cygnus manages to stall them long enough for Mega Man to unleash Star Break on three of them, forcing Gemini Spark to retreat and effectively killing Cygnus, separating him from Tom. 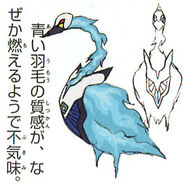