D-Rex is the boss of Sigma Stage 3 in Mega Man X. It was supposed to be a destructive weapon with about 30 meters length based on the T-Rex (hence the name), but by the time that Sigma's hideout was invaded by X, only the head was completed, so it was converted into a tank-like Mechaniloid to be used against him.[1] Due to its outstanding performance, REX-2000 was developed on the basis of D-Rex.[2][3]

D-Rex's top can detach from the bottom, hovering in the air, and both try to crush and seriously damage X. The bottom can be stood upon, but if X stands there for too long the top will try to crush him. When either section collides with a wall, it can daze X and knock him off. Both sections can also charge up massive electron spheres that inflict devastating damage. Its main weakness is the Boomerang Cutter.

Inflicts Virus and Blind to all party members.

Sends 1-3 Bombs that do damage as D-Rex's remaining LE to one party member, to higher LE more damage.
Damage of Mini Rex:

Mega Man X: Command Mission
In Mega Man X: Command Mission, the D-Rex is a common, but powerful, enemy that appears in the Vanallia Desert. This D-Rex is a brownish-grey and is more dinosaur-like in appearance. D-Rex attacks with shots, Heterostorm and releases explosive miniatures called Mini Rex. Mini Rex can be prevented if D-Rex's jaw is broken with at least 11 C-type attacks.

Run away in his third turn onwards after being damaged by 11 C-type attacks. Trickstar and Stealth Mode take damage of Mini Rex.

Sends 1-3 Bombs that do damage as D-Shark's remaining LE to one party member, to higher LE more damage.
Damage of Mini Shark:

A D-Shark is available from the beginning in the Deployment Center.

When Sigma-1 built an army of Mavericks to defend his base on the Lost Hex in Worlds Unite, the D-Rex appeared alongside such constructs as Eregion, the D-1000, Raider Killer, and the Shadow Devil. 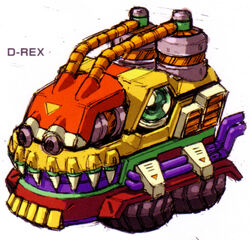 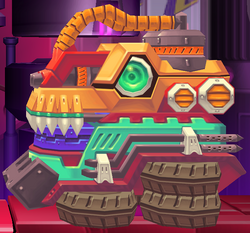 D-Rex as it appears in Maverick Hunter X 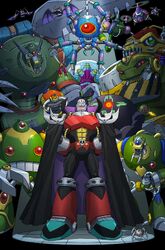