watch 02:06
The Loop (Games)
Do you like this video?
Spoiler warning: Details of plots, secrets and/or endings may follow.

Vincent Tong
Namagem is a character in the Mega Man: Fully Charged animated series and comic book series. Originally a ruthless and mysterious enforcer of Lord Obsidian, he is later revealed to be Aki Light's twin brother who was kidnapped by Sgt. Night toward the end of the Hard Age and forced to serve Obsidian until Sgt. Night was unmasked and arrested for his crimes. Vowing revenge on Mega Man for having a better life than him, Namagem begins to work alone, where he casts off the name Namagem and names himself Daini. Namagem's original name before he was kidnapped by Lord Obsidian is unknown.

Namagem serves as a major antagonist throughout the animated series before becoming an anti-hero in the comic series.

Namagem possesses traits similar to that of Proto Man and Bass from the video games, as both a brother to Mega Man initially under the influence of the bad guys in disguise and as a rival who wishes to be the one to take Mega Man down while often ignoring his boss’s orders. Namagem also shares Bass’s color scheme and eye color, and his desire to prove he's stronger than Mega Man. This also makes him similar to Solo from the Mega Man Star Force series, as Solo's character is an amalgamation of ProtoMan.EXE and Bass.EXE from the Mega Man Battle Network series.

As the name given to him by Breaker Night implies, Namagem being Mega Man spelled backwards, Namagem is nearly identical to Aki with the exception of having a different color scheme. In a flashback showing his creation, his armor was shown to be almost completely yellow, and had a fin-like object on his helmet similar to Mega Man’s super form. He has a paler skin tone than is brother. Further emphasizing the connection between the two, Namagem and Aki share the same voice actor Vincent Tong, though his voice is deeper than Aki’s. Namagem has heterochromia due to his torturing by Night, having a his normal red color for his right eye and a faded pink eye for his left eye, accompanied by a large scar running down his face through the eye. In the comics, it is shown that his hair is a dirty blond, slicked back, and shaved on the sides.

His Namagem form is similar to that of Lord Obsidian, but has black and yellow armor, a different mask/helmet, an arm cannon on his right arm instead of his left, and is the same size as Mega Man. He only has one jet blade on his back that he instead uses as a boomerang instead of a laser gun.

Namagem is aggressive, prideful, and impatient. Though loyal to Sgt. Night, his insubordinate attitude sometimes drove him to disobey him, as seen when he went out to challenge Mega Man against his master's orders. Although he was friendly to his boss, he secretly fears his Lord Obsidian form. When he leans the truth about all of Night's lies, he became horrified and and called himself a monster, becoming more vengeful towards his brother for having a better life than him while he was being used as a tool by Night. He then casts of the Namagem name and goes by the name Daini, working alone to avoid taking sides after the trauma he experienced working for Night.

He makes his debut in Lightfall Part II saving Lord Obsidian and taking him back to their lair.

In Big Bad Dreams, Hypno Woman revealed that Dr. Light asked her to help with Namagem, although this fails when she was captured and he copy her ability in the process.

In Enemy of my Enemy, he and Fire Man held a grudge against each other.

He appears in The Gauntlet Part II.

In the aftermath of Breaker Night’s attack, Namagem walks through Silicon City on a rainy night and looks up at a news report detailing Night’s attack, Mega Man being hailed as a hero, and the Robot Master’s intentions and scowls. Later, when Aki and Suna are looking at a news article about Dr. Wily’s upcoming lecture on the Hard Age, Namagem watches from a tree nearby, stating that Mega Man has no idea what’s coming, and that he could not stop it if he did while transforming into his combat form. Mega Man: Fully Charged (BOOM! Studios) Issue 1

Namagem attends Dr. Wiy’s lecture where he watches Aki and Suna. When the Robot Masters blow up the stage and everyone evacuates, Aki notices Namagem but is unable to confront him without revealing his identity as Mega Man, and Namagem escapes.

Later Namagem intercepts Mega Man as he heads home from Dr. Wily’s house thinking to himself that homes are wasted on the ungrateful, and that his brother is the most ungrateful of them all. The two point their busters at each other where Namagem casts off the name given to him by Lord Obsidian, going by Daini now. Aki compliments the name and states its been a while since they’ve fought. Daini says that he has fought fought plenty, but can’t wait to take down Mega Man again. The two fight a bit and Mega Man says he hasn’t seen Daini in months, to which Daini replies he didn’t leave, but has been watching Mega Man from afar. Daini asks what Mega Man’s business with Wily was before rushing him, and the two fight more. Daini gets the upper hand and points his buster as Mega Man, demanding answers. Mega Man tells Daini that he went to Wily for answers about their past since their father wouldn’t tell him, and that Wily told Mega Man that he should lead the Robot Masters and offered him an upgrade. Daini scoffs and says Mega Man is not cut out for war and asked him what his response was. Daini says that Wily is right and that war is coming, and Mega Man asks him what side he is on, to which Daini replies he chose a side once and regretted it. He states that he never knew Breaker Night as a person, just as Lord Obsidian who kidnapped, brainwashed, and tortured him, and that Dr. Light isn’t as saintly as he seems either. Mega Man asks if he should accept Wily’s offer, but Daini simply states he works alone and suggests Mega Man does the same before leaving. Mega Man: Fully Charged (BOOM! Studios) Issue 2

Like his brother, Daini can copy and use Robot Masters' weapons, though he can store more than three at a time.

His replication ability works different from Aki’s and more akin to the classic Mega Man from the games until Mega Man 11, where his ability only copies the weapon for the buster, instead of changing his overall look to match the Robot Master he has copied from.

A difference between him and Mega Man is that he doesn't change his appearance or buster with any schematics he activates, and it can be noted that he can only copy and use projectile-based abilities. This can explain why he doesn't have any melee-based weapons, such as Drill Man's drills, Wave Man's harpoon, Cut Man's blade, or Guts Man's vacuum buster, though this is one particular weapon can't be changed, due to his buster's inability to match the weapon of the robot master he got the schematics from.

Boomerang: The spikes in his shoulders are boomerangs he can throw.

Weakness
Like the Mega Buster, Namagem's arm cannon can suffer from overcharging and overheating if used continuously without. Stop. If he is continuously attacked, his mask can fall away, revealing part of his face. 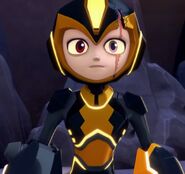 Namagem in his normal form. 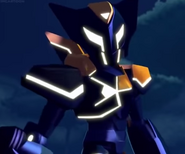 Daini in the comics, without his armor 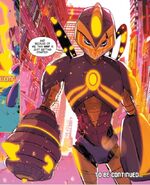 Daini's upgraded form from Megaman fully charged issue no 4
Add a photo to this gallery
Retrieved from "https://megaman.fandom.com/wiki/Daini?oldid=344425"
Community content is available under CC-BY-SA unless otherwise noted.