Dark Hold (ダークホールド, Dāku Hōrudo) is a Special Weapon obtainable in Mega Man X5 by defeating Dark Necrobat. It can stop time in X and Zero's surroundings; the duration of the weapon depends on the Weapon Energy.  Once active, it can only be shut off if X or Zero switch Weapons. Because it is activated as soon as the Special Weapon button is pushed, it cannot be charged. To deactivate Dark Hold, either simply go to the Sub Screen and choose another weapon or use a Giga Attack.

Spiral Pegasus is the only boss that can be frozen by this weapon - all other bosses are otherwise immune to the Dark Hold. When used against Dark Necrobat in the boss rematches, it will only consume one unit, and the screen will only flash white for a split-second. 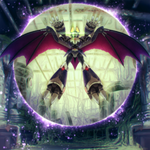