In overdrive, he'll attack with large scythe like energy blades, perhaps as a nod to Rasetsusen. But as his name implies, he is not fond of light, and is weak to the light-based weapons gained from Optic Sunflower. Zero will have to be careful with Tenshouha, as like with other Giga Attacks he's possessed in the past, it has limited capacity. 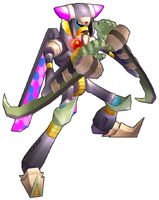 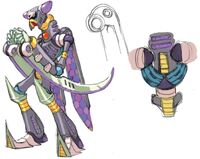 Concept sketch of Dark Mantis.
Add a photo to this gallery

Retrieved from "https://megaman.fandom.com/wiki/Dark_Mantis?oldid=178215"
Community content is available under CC-BY-SA unless otherwise noted.