Dark Hold (both X and Zero)

"Squeak! This is GREAT! Very funny! The Earth has been severely damaged... Very cool, brother! Squeak! Let's retire all of the Reploids together!"
―Dark Necrobat, Mega Man X5

Dark Necrobat (ダーク・ネクロバット, Dāku Nekurobatto), also known as Dark Dizzy,[2] is a vampire bat-based Reploid from Mega Man X5. He resided in a planetarium somewhere in Egypt and was in possession of the Fuel Tank required to make the Space Shuttle operable.

Dark Necrobat is a tall Reploid with the traits of a vampire bat. He possesses large wings and ears, and his feet end in clawed toes. His armor is most blue, purple, and white in color. His right eye resembles a monocle and his mouth is a fanged mechanism.

Necrobat was a Maverick created by Sigma three years before the events of Mega Man X5, but he escaped from his control and had remained in hiding since then. Sigma, not considering him a critical asset, forgot about him. Because of this past, he is nihilistic and aggressive, and dislikes being underestimated. He also hates both Mavericks and Maverick Hunters, and refuses to cooperate with either. He also implies that he knows about Zero's original status as a Maverick when encountering him. He has a verbal tic where he squeaks, similar to bats.

In battle, Necrobat flies about, sometimes teleports, and can summon Batton Bones to attack the player. Like bats, he doesn't like light, and is weak to Shining Firefly's weapons, F-Laser (with X) or C-Flasher (with Zero). It is possible to defeat Dark Necrobat with a single F-Laser by hitting him only with its trail.[3]

While he's flying around, he may sometimes dive at the player, grab them and bite the player's character to drain his life energy, like a vampire. If Necrobat is low on health, he will release Sonic Waves up and down the screen. After that, he will use Dark Hold to freeze the player and attack with either a Sonic Wave or Batton Bones. If the player hits Dark Necrobat while he is casting Dark Hold, he will be stunned and drop to the floor.


Dark Necrobat: Squeak! Who cares? In situations like this everybody dies, not only Mavericks but also Maverick Hunters. Squeak! But just to make sure, I'll kill you myself!

Dark Necrobat: Squeak! This is GREAT! Very funny!
Zero: Is he insane already?
Dark Necrobat: The Earth has been severely damaged... Very cool, brother! Squeak! Let's retire all of the Reploids together!

In the Mega Man and Sonic the Hedgehog comics crossover Worlds Unite, Dark Necrobat is one of the dozens of Mavericks revived by Sigma-1 as part of his plan to conquer various worlds and absorb their power. He joins Wind Crowrang in attacking the world of Billy Hatcher and the Giant Egg, but is defeated by its heroes and their new allies from the Sky Patrol.

Necrobat appears in the Rockman X5 manhua, helping Crescent Grizzly attack some humans with his men. 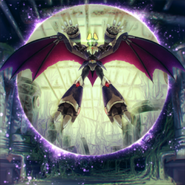 Dark Necrobat in the Dark Hold card from TEPPEN 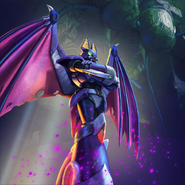 Developer Comments
"This was also influenced by a certain manga, so perhaps they asked the designer, "Please give him a Bat XXras feel!" (grin) [The character/manga he refers to might be Karas. The name is "Kohmori ??ras," where ?? is one kana blotted out.] However, as you can see from the results, he finished up as a smart design, and I really like it. Just before the game was completed, we discovered a bug that made the Dark Hold perpetually freeze the game. Gave me a real chill. (grin)"[4][5]

Designer Comments
"Being a bat, he was established as draining his opponents' energy, so in short, he was Count Dracula, and I gave him form straight from that. A monster in full dress. He's the only one this game to have the Sigma mark on him."[4][5]

"I shamelessly went for the Count Dracula look here. His right eye is a monocle, and he has a haughty air about him." -Haruki Suetsugu, Mega Man X Official Complete Works, 2009[1]