Dark Rockman.EXE (ダークロックマン, Dāku Rokkuman) is the evil counterpart of Rockman and a major antagonist in the second half of Rockman.EXE Stream as the leader of the second incarnation of Darkloids. Created after ShadeMan bit Rockman infusing him with a Dark Aura, Rockman is saved with a Vaccine Chip, though while returning to Netto Hikari from the past, a ball of light extracts Rockman's Dark Aura and whisks it away.

As the dark inverse of Rockman, Dark Rockman is twisted and sadistic, possessing the exact opposites traits and beliefs as the original and holds nothing but contempt for his more just counterpart. When he first made himself known to Netto and Rockman, he nearly deletes Roll, NumberMan, AquaMan, and IceMan before attempting to have Netto himself delete Rockman. He has no care of his Darkloid followers, seeing them as idiots that would die for him.

He has all the same powers, abilities, and memories as both Rockman and Netto, and can “slot-in” chips and can even execute Program Advances, a feet that should only be achievable with synchronization of the Navi and operator. Since he is a product of Rockman himself, he's able to predict both Rockman and Netto’s next moves and counter them, making Dark Rockman a highly dangerous opponent. As a Darkloid, he is able to use powerful Dark Chips with no side effects.

It is revealed that ShadeMan wasn't deleted by LaserMan, but he instead escaped into the future through a "past vision". After regenerating, he bites Rockman, infusing him with a Dark Aura, and escapes 20 years into the past, where he gains victory over the cyberworld for the Darkloids. Rockman, having ended up in the past with him, teams up with Colonel to hunt ShadeMan, but ShadeMan makes Rockman's Dark Aura emerge, forcing him to turn on Colonel. Netto manages to hit him with a Vaccine Chip in the present time, cleansing him, but on his way back to the present, Dr. Regal, in the form of ball of light, extracts Rockman's Dark Aura. A twisted version of Rockman briefly forms, smiling menacing at him, and is whisked away. Shademan Strikes Back Space-Time War

Dark Rockman later emerges stating his undying hate for Rockman, and lures Roll, NumberMan, IceMan, and AquaMan to a random location and nearly deletes them. Rockman claims to have had a disturbing dream (revealed to have been a vision Dark Rockman gave him of this event), causing Netto to bring him to the SciLab. Netto leaves while Rockman stays to be scanned for any bugs or viruses, but Meijin finds no issues, so Rockman heads to meet up with Netto, only for Dark Rockman to intercept him and switch places with him.

Appearing as the real Rockman, Dark Rockman spends the day with Netto, causing various crimes and immoral acts to "appease" his best friend. This lands Dark Rockman in jail, where he claims that he has a major glitch causing him to act badly, and begs Netto to delete him before he goes to jail. Netto refuses, and after noticing that the band-aid that was stuck to Rockman's behind (caused by a practical joke chip Netto used on Rockman) was not there, demands to know was standing before him.

The sinister Navi reveals himself to Netto, and reveals that the real Rockman had been blown to a different area of the net and is being attacked by a new horde of Darkloids under his command: SwallowMan, BlizzardMan, CloudMan, and CosmoMan. He also reveals that he planned on begging Netto to delete him, only to switch places with the real Rockman last minute, thereby causing Netto to delete his own best friend. His plan having failed, Dark Rockman claims that Rockman will not live to see another day, though he is saved by the timely arrival of ShadowMan and Dark Miyabi. ShadowMan uncovers Dark Rockman's hiding spot, where he states the world doesn't need two Rockmans. Netto and Rockman attempt to take him out with a Giga Cannon Program Advance, but Dark Rockman counters with his own Giga Cannon and the two cancel each other out. Dark Rockman and his Darkloids then take their leave. Another Rockman

He appears in episode 46.

He appears in episode 47.

He appears in episode 49, where his true origin was revealed during his battle with Rockman: in a flashback where Dark Rockman has a conversation with Regal, he was revealed to apparently have been a clone of Rockman created by all the Dark Aura that Rockman absorbed throughout the anime. He is deleted when he keeps Slur busy so that Rockman, SearchMan, and Blues can go to confront Duo. Before they go, Dark Rockman tells Rockman to go back and be with Netto. As the three proceed to Duo, Dark Rockman’s data rejoins Rockman, where Rockman states they can both be with Netto. 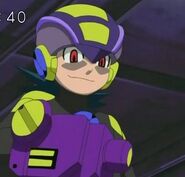