"I'll delete you before you even know it..."
―Dark Scythe, Mega Man Battle Network 6

"No one can escape the grip of darkness!"
―Dark Scythe, Mega Man Battle Network 6

Dark Scythe, known as Dark Kirisaki (ダーク・キリサキ, Dāku Kirisaki) in Japan, is a character from Mega Man Battle Network 6: Cybeast Gregar. He is an assassin trained by Dusk and his NetNavi is EraseMan.EXE. Both of his Japanese game and anime incarnations are also known as the "Black Death God" (黒死神, Kuroi Shinigami).

Dark Scythe is sadistic and doesn't show his emotions in front of others, he's the type who prefers to suffer in silence.[1] On the other hand, he is confident in his NetBattling abilities and isn't afraid to show it. In the games, he is a very cold and professional individual. Like Dusk, he would eliminate his current comrades if he were hired to do so in the future. Dark Scythe hopes that he is never ordered to kill Lan or MegaMan, but will do so if hired.

Dark Scythe is a young man the same age as Lan Hikari. He has a slightly creepy appearance, having no light reflection in his eyes, and there's only a faint shadow where his eyebrows should be, the color of his eyebrows being somewhat faded.[1] He has dark blue hair and wears dark clothes. He wears a silver ring that has EraseMan's emblem on it.[1]

After failing to win the Operator Navi Selection Test, Dark Scythe states that he would have triumphed if the final trial had relied on battle expertise instead of exploration skills. Before long, Dark Scythe begins offering lessons at Cyber Academy in Central Town.

Email promotions regarding his classes, suggest that NetBattlers may learn some brilliant battle techniques. In truth, Dark Scythe is providing lessons on assassination, which he previously revealed to Lan.

Dark Scythe's mission involves assassinating several gang members in the Undernet. After taking his lesson and defeating him in a NetBattle, Lan Hikari gains the Erase Cross.

Dark Scythe lives in Beyondard and leads a subdivision of the human resistance. He shows more personality here, shown to be clever and cunning, and full of last minute resorts, like throwing a frag grenade into one of Lord Wily's helicopters.

It is revealed that he used to be a mercenary, but was devastated when he failed a mission. Commander Mask consoled him and he has been serving the Commander ever since to repay his kindness. He is also implied to be the planner of the creation of the super cannons engineered to fight Cybeasts. When he mets Lan, CutMan's brothers kidnap Commander Mask, forcing Scythe to destroy MegaMan. 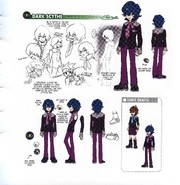 Concept art of Dark Scythe.
Add a photo to this gallery

Retrieved from "https://megaman.fandom.com/wiki/Dark_Scythe?oldid=311331"
Community content is available under CC-BY-SA unless otherwise noted.