Dash (ダッシュ, Dasshu) is a move that temporarily speeds up the character. While dashing, the character lowers their body, and can avoid some attacks. However, it cannot get the character as low to the ground as Sliding can. In most games that it appears, Dash can be executed by pressing a button designated for it or by double-tapping and then holding a directional button. The latter is also known as Command Dash (コマンドダッシュ, Command Dash), and can be toggled on and off on Mega Man Zero 4 and the Mega Man ZX series games.

Dash first appeared in Mega Man X as a move that X obtains from the Foot Parts, enabling his Emergency Acceleration System, and is present in all games from the Mega Man X, Zero and ZX series.

Besides the standard ground dash, some games have different varieties. This list only includes moves available for the player as many bosses are also able to dash, some in unique ways such as Blizzard Wolfang being able to dash in the ceiling.

Air Dash (エアダッシュ, Ea Dasshu) allows the character to dash straight ahead while in mid-air. It first appeared in the Mega Man X series, becoming available for X if he is equipped with the Second, Third, Fourth, Ultimate, or Falcon (X6 only) Armor's Foot Parts. Zero can Air Dash by using the Hienkyaku technique. He is always able to do so from Mega Man X5 to Mega Man X: Command Mission, while X only inherited such ability from Mega Man X7 onwards. Mega Man X5 is the only game where Zero can power up his Air Dash, by collecting the F-Splasher technique. Although absent on the Mega Man Zero series, it returns in the Mega Man ZX series, used by Model H/HX.

In Mega Man: The Power Battle and Mega Man 2: The Power Fighters, this is Bass's dash move. Unlike other appearances, this can only be performed by pressing down+jump while in the ground, like Mega Man's Sliding and Proto Man's Dash. Bass rises from the ground slightly and performs an Air Dash. Besides the speed boost, this helps him avoid ground-level attacks. In the second game Bass can also use Air Dash in mid-air, but it can't be done directly after a Wall Kick.

Mach Dash (マッハダッシュ, Mach Dash) is a chargeable special Air Dash from the Blade Armor. The Mach Dash can be performed in four directions (forward, backward, up, and down), and X is invincible at the very beginning of the dash. Dash distance is double that of a normal Air Dash.

The Glide Armor allows X to use a variant of the Air Dash, known as the Glide Dash[Citation needed] where X is capable of gliding through the air instead of dashing, allowing him to reach greater distances compared to the Air Dash despite its slower speed and can be used to reach out of reach areas, including those that are too far for Axl's Hover ability. However X drops slowly to the ground while the Glide Dash is in use.

Giga Tackle (ギガタックル, Giga Tackle) is Duo's dash move in Mega Man 2: The Power Fighters. Duo performs a tackle that hits enemies with the spikes on his shoulder. He is the only character in the game that can cause damage with a dash.

Shadow Dash is a skill that allows a character to be invincible during a dash, but only through certain obstacles. It can be used by X in Mega Man X8 with the Foot Parts of the Hermes Armor equipped, by Zero in Mega Man Zero 3 with the Shadow Dash Foot Chip equipped, and by Model P/PX in the Mega Man ZX series.

Water Dash (ウォーターダッシュ, Water Dash) allows the character to dash in any direction while swimming underwater. Used by Model L/LX in the Mega Man ZX series.

By using Power-Ups, Dash can be improved. 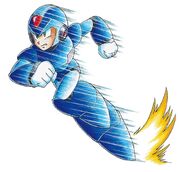 Retrieved from "https://megaman.fandom.com/wiki/Dash?oldid=293695"
Community content is available under CC-BY-SA unless otherwise noted.