Priest of the Killing Blade[1]
(殺刃祈祷師)

"What's the use of century-old junk in this new world? I'll cut you down and send you off to the deadlands!"
—Deathtanz Mantisk, Mega Man Zero 3

Deathtanz Mantisk (デスタンツ・マンティスク, Desutantsu Mantisuku) is one of the first four bosses of Mega Man Zero 3. Mantisk is a Mutos Reploid based on a praying mantis and the grim reaper, and was originally created for the sole purpose of execution. He is the Moonlight Judge (月光審官, Gekkō Shinkan)[2][3] from the Eight Gentle Judges, and used his "Grim Reaper's scythes", which are durable and sharpened at the atomic level, to dispose of Reploids considered Mavericks by the judges as a Vice Chief Judge.[4] In the Remastered Tracks Rockman Zero Telos, Deathtanz says he doesn't like to take an unnecessary life and that the dullness of his scythes were proof of peace. However, after he was modified by Dr. Weil to be one of the Weil Numbers, he cares for nothing besides killing. He also has a habit of using the Japanese onomatopoeia, "chikachika" (ギチギチ, "gichigichi" in Japan), when irritated. He was sent by Dr. Weil to capture the Baby Elves, and was defeated by Zero. Mantisk, at least in his modified form, also seems to have a fear of dying, as evidenced by his last words to Zero after being defeated in his rematch in Weil's Laboratory.

Mantisk mainly attacks with his scythes either throwing them as boomerangs, slashing from above, doing a quick stab, or throwing them across the floor, up the wall and then back to him. If the player has A or S rank, he will use his EX Skill Rock Breaker. One strategy to defeat him is to equip a normal body chip and attack him with a charged Recoil Rod, which will knock him back and sometimes interrupt his attacks. The Burst Shot EX Skill may also be a good idea, as it can deplete an moderate amount of health from him, although the aforementioned strategy may be better.

Defeating him will give Zero the Light Body Chip, and if the player is at A or S rank, the 1000 Slash EX Skill. 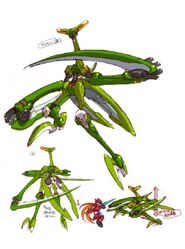 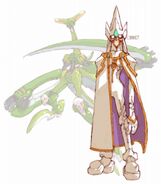 Mantisk standing sprite, seen briefly when the player skips the cutscene, or is defeated and re-enters the room.