The Misadventures of Tron Bonne
Rockman DASH: 5tsu no Shima no Daibouken!

Nadine Rabinovitch
Denise Marmalade (デニッシュ・マーマレード, Denisshu Māmarēdo) is a rookie cop from the Mega Man Legends series that works for the Ryship Island police force. She appears to be heavily inept at her job, and often belittles herself on how poorly she does as a cop. She also lives with her mother (referenced in the first "Bank" mission where Tron mocks her about being woken up by mommy, to which Denise asks how she knows that). She usually works at a desk, filing endless mounds of paperwork and fearing her next dressing-down from her captain.

When Tron Bonne and her Servbots first attempt to rob the Ryship Island Bank, Denise is the last police officer to respond to the call because she awakened late, fighting against Tron alone and without success in arresting her.

Tron goes on to rob the bank three times (only succeeding twice), and each time, she is confronted by the determined Denise. The first encounter has Denise in a police car throwing bombs, and when the police car is destroyed, Denise attempts to run from the Gustaff, only turning to throw bombs at ample distance. During the second encounter, Denise fights Tron and the Gustaff hand-to-hand with a superhuman ability to backwards suplex the Gustaff with a single hand. In the last encounter, she faces off against Tron and the Gustaff with Compages (コンパーゲース, Konpāgēsu), a powerful mecha equipped with a large riot baton.

At the end of the game, after being severely punished by her captain for failing to arrest Tron three times (and having an extremely expensive mech destroyed), Tron leaves the tied-up Lex Loath and Glyde at the Ryship Island Police Station, leading the captain to think that Denise captured them. Then the captain decides to not fire her because they were the most dangerous criminals around. But then the captain tells her that she needs to make a report about how she captured these lawbreakers or she'll get the boot.

Denise appears in 4Koma Manga Show Stadium: Tron ni Kobun and has a cameo appearance as a weather forecaster in the story "R Destruction Order" of the manga Mega Man Megamix. 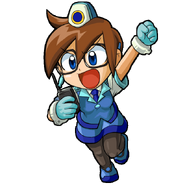 Denise in Street Fighter × All Capcom.

Retrieved from "https://megaman.fandom.com/wiki/Denise_Marmalade?oldid=243675"
Community content is available under CC-BY-SA unless otherwise noted.