Dex Oyama, known as Dekao Ōyama (大山 デカオ, Ōyama Dekao) in Japan, is a character from the Mega Man Battle Network series. He is Lan's rival and GutsMan.EXE's operator. He has a little brother named Chisao, that believes that Dex is the best Operator in the world; and Dex tries desperately to maintain his respect.

Although his skill never quite allows him to defeat Lan, he is nonetheless a dedicated Netbattler who frequently ranks highly in several competitions and provides key assistance in a handful of incidents.

Dex acts very arrogant and boastful. He cares very much for Chisao, often panicking when he gets in trouble, and tries to maintain his respect in both the games and the anime. He also has a rivalry with Lan and the two compete whenever they can, usually by NetBattling.

He and Lan are similar in that they forget to do homework and do poorly in class. Dex also gets very mad when Mayl hugs Lan or shows any kind of affection for him at all. Dex cares deeply for his friends and is willing to risk his life for them. Dex has also been known to get emotional, like when he was going to move away to Netopia.

Like in the games, Dex is Lan's rival. Prior to the series, Dex always defeated Lan in NetBattles; but, after Lan's generic NetNavi is upgraded to MegaMan.EXE, he is easily defeated. Dex provides comic relief in many episodes. He also has a crush on Mayl, but is always turned down.

In MegaMan NT Warrior Axess onward, his appearances are less frequent as Dex goes to another country with the ex-WWW members to work at their curry shop called #2 Curry and train hard. When he returns, he has a gung ho attitude and challenges Lan and MegaMan to a NetBattle. However, they are attacked by BurnerMan.EXE and MegaMan teams up with GutsMan to defeat him.

In Rockman.EXE Stream, he continues to work at the curry shop, both as a cook and as a delivery boy, until moving back to work at #1 Curry.

Dex is Lan's classmate and rival, and is unable to win against Lan and MegaMan. He assisted Lan against StoneMan. After WWW's fall, Maysa was looking for the kids that defeated the criminal organization to NetBattle against them, and Dex told him he was one of them. After Maysa discovered that he was lying, he got angry and SharkMan almost deleted GutsMan, but Lan and MegaMan appeared to challenge him and they defeat Maysa. After the NetBattle, he gives several fishes to Lan and Dex.

Later, not wanting to fall behind Lan, Dex trains hard to form a Full Synchro with GutsMan, and managed to do it once by accident when he hit his head while frustrated and felt unconscious. While in Full Synchro, Dex and GutsMan helped Lan and MegaMan find PharaohMan's pyramid, but he lost the synchronization inside the pyramid.

Dex is Lan's classmate and rival, and he is unable to win NetBattles against Lan and MegaMan. He assisted Lan in his first battle against Gospel, against StoneMan, and in the last battle against the original WWW members and the Life Virus. 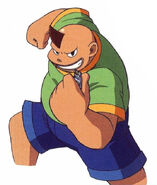 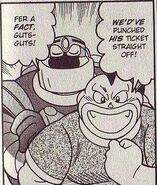 Dex and GutsMan.EXE in the Mega Man NT Warrior manga.