Fire-elemental attack to all enemies.

Dig Labours attack by throwing pickaxes. If a pickaxe hits the player, the one who tossed it laughs. In the first Mega Man X game they appear in the stages of Armored Armadillo and Flame Mammoth, and also in Sigma's hideout. They appear in Flame Mammoth's stage in Mega Man Xtreme 2.

Degravers appear as workers in Central Tower during Chapter 2, and in the Gimialla Mine X can make trades between four different colored mining Mechaniloids with the same appearance as Degravers to give their pickaxes to the right owner. A broken Degraver can be found in Gimialla Mine and repaired to be used in the Deployment Center.

Degravers appear as enemies in the Melda Ore Plant, where they are encountered frozen in the Ore Plant External Tank. If they are attacked by X's group, they will retaliate, having a high chance to counter all attacks. If the player uses the item Warm-up, Cure One or Cure All to unfreeze a Degraver, he will be thankful and run away from the battle if not harmed, dropping different items.

Dig Labours appeared in the Rockman X manga as one of the Maverick minions from Sigma's army that surrounded X and Zero in the forest and as Armored Armadillo's subordinates. 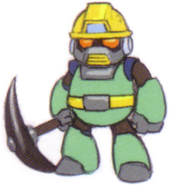 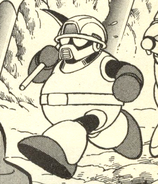 Retrieved from "https://megaman.fandom.com/wiki/Dig_Labour?oldid=321980"
Community content is available under CC-BY-SA unless otherwise noted.