Disk Boy 08 (ディスクボーイ８, Disukubōi 8) is a Reploid model that is famous in the 21XX fighting sport Snapper Disk (スナッパーディスク, Snapper Disk).[1] Maverick Disk Boy 08s appear as enemies in Mega Man X2 and Mega Man Xtreme. They primarily appear on Morph Moth's and Wheel Gator's stage, but they are also on Agile's stage as well.

They mainly defend with a shield, and may sometimes jump to evade shots. However, unlike Sniper Joes and Hoganmers from previous games, if their shield is hit by a charged shot, if will flip up into the air for a while, rendering them defenseless until it returns. Their jumps can also be used to the player's advantage, as a right timed shot can hit their legs while they fall. They only form of attack is, as their name implies, throwing a spiked discus at the player, opening their defenses while doing so.

The Crystal Hunter is their main weakness, but the Strike Chain also destroys them in one hit. In addition, when used on the ground, the fire trail left by the Speed Burner is also able to pass underneath their defenses and easily kill them.

They can be used to find items, mostly in Morph Moth's stage, where one must be frozen with Crystal Hunter to get a 1-Up with a Heart Tank, and one must be killed to access the secret X-Hunter room.

Disk Boy 08s are seen in the Rockman X2 manga witnessing the reawakend Zero alongside their Maverick comrades. More are later seen during Wheel Gator's attack on the city. One tries running from the X-Hunters' base on the North Pole, only to get beheaded by Agile. Disk Boy 08 is one of the Mavericks present in Sigma's base in Sonic Universe #76.

The Disk Boy 08 trying to run away from the bad guys' lair only to be killed by something or someone offscreen is similar to what a Kasplat does in Donkey Kong 64, only for King K. Rool to use a Purple Klaptrap (Red) to execute him offscreen. 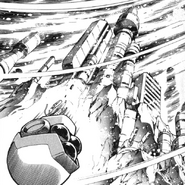 A Disk Boy 08, after getting beheaded by Agile.
Add a photo to this gallery

Retrieved from "https://megaman.fandom.com/wiki/Disk_Boy_08?oldid=298047"
Community content is available under CC-BY-SA unless otherwise noted.