Dive Man (ダイブマン, Daibuman) is a Robot Master created by Dr. Cossack with the AI functions of a miniaturized submarine. When Dr. Wily forced Dr. Cossack to work for him, Dive Man was modified for combat against Mega Man in Mega Man 4. His Special Weapon is the Dive Missile - special Homing Missiles that he can launch from his chest, much like torpedoes on a submarine. These were originally designed to catch fish, but are adapted to home in on nearby opponents and explode, working equally well both in the air and underwater. Due to a design mistake, Dive Man can also attack by launching himself forward like a torpedo, ramming into his foes to do major damage.[1]

In fitting with his naval disposition, he is a good listener, but quite ironically for being an aquatic robot, he tends to suffer from motion sickness easily - perhaps referring to the fact that submarines are designed primarily for underwater use. Dive Man does not like Pirate Man, due to their opposing principles regarding the sea.

Dive Man is one of the eight bosses. He attacks by firing three Dive Missiles and by erratically launching himself to crash into Mega Man. While the missiles can be destroyed easily, his launch attack has to be avoided by jumping over him. It's hard to tell which attack he is doing as he always folds his arms before attacking.

Dive Man is one of the four bosses fought in the Wily Castle. His strategy is similar to Mega Man 4.

"Dive Man's missile will chase you. Use a weapon you'd think is useless underwater. It will work very well!"
—Dr. Light

Dive Man is one of the six bosses from the "Rescue Roll!" course. He is weak to the Thunder Beam (likely due to how dangerous it is to mix electricity and water).

Dive Man and Aqua Man team up with Capricorn in the "Arctic Glaciomarine" in Kazakhstan on Dr. Wily's orders. Later, he appears in a chemical plant alongside Astro Man and Yamato Man.

* Coral reel is a misspelling of coral reef.

Translation: (approximate) A robot with the AI capability of a compact submarine. He can fire missiles from his chest, and due to a design mistake he can launch himself like a missile. Special Weapon is Dive Missile.

Enemies in Dive Man's stage in Mega Man 4 and Mega Man III, an underwater area with spikes. The Wire item is in his Mega Man 4 stage, in a pit after the second Moby.

Amount of damage in units that Dive Man receives from each Special Weapon in Mega Man 4.

Dive Man appeared in the episode 20,000 Leaks under the Sea from the Mega Man animated series voiced by Terry Klassen. In the cartoon, he has propellers in his feet and fires Dive Missiles from a cannon in his left arm instead of his chest. Dive Man, Wave Man, Cut Man and Guts Man attack an undersea mine with Wily and Mega Man tries to stop them. During the battle, a giant squid throws Dive Man into Guts Man and they get stuck in the net Guts Man was using. Cut Man tries to free them, but is stopped by Mega Man. The two eventually get free and, alongside Wave Man, attack Mega Man. Mega Man manages to drop the four robots into an underwater pit, and they retreat. They later attack the mine again, and Mega Man defeats Dive Man by sending a Dive Missile back to him with Wave Man's weapon. Dive Man has a somewhat screechy voice.

In the manga, Dive Man is a marine robot designed for work in the fishing industry. He has an ultrasonic sonar that allows him to lock-on to his target in low-visibility environments. His Dive Missiles are mobilized by a screw propulsion system, and are equipped with both active as well as passive sonar systems. Despite all these features, the missiles function in almost complete silence. When fighting out of water, the Dive Missiles switch to a jet propulsion system, and they also have the added feature of a laser tracking system. Before the battle against Mega Man, Dive Man's ability and durability were enhanced. He is a true robot of the sea, and can be a little reckless at times, sometimes even resorting to charge into his enemies head-on.

After the events of Mega Man 4, Dr. Cossack's Citadel is destroyed by Skull Man and Dive Man protects Kalinka from the collapsing building. He and Kalinka are later found in the rubble by Mega Man and Roll, and he is repaired by Bright Man. Dive Man, Bright Man and Toad Man help Mega Man rescue Dr. Cossack and the other robots captured by Dr. Wily and Skull Man. During the fight against Dust Man, Drill Man and Pharaoh Man, Dive Man defeats Drill Man by launching several Dive Missiles on him. Mega Man and the seven Cossack robots later join forces to fight against Skull Man.

Dive Man appears among the Robot Masters in the Mega Man-Sonic crossover arc Worlds Collide, specifically in Sonic the Hedgehog Issue 250. He fought Amy Rose alongside the other aquatic-themed Robot Masters, but was taken down by Tails. He later ended up attempting to use Dive Missile on Sonic, but Sonic's speed got him out of the way and Dive Man ended up firing it at Drill Man instead. 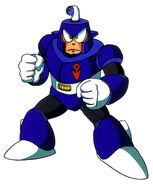 Front, side, and back view of Dive Man.

Dive Man in the Rockman 4 manga. 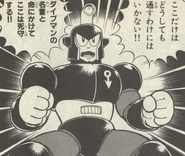 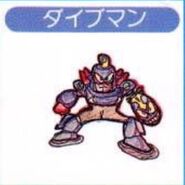 Retrieved from "https://megaman.fandom.com/wiki/Dive_Man?oldid=290955"
Community content is available under CC-BY-SA unless otherwise noted.