MMKB
Register
Don't have an account?
Sign In
Advertisement
in: Robot Masters, Mega Man 3 bosses, Robots made by Dr. Wily,
and 4 more

The Doc Robot K-176 (ドクロボットK-176, Dokurobotto K-176) is an all-purpose robot from Mega Man 3. He comes with a number of different attachments and devices on his body that can use the same abilities of other robots by switching his program data.[1] After defeating the eight Robot Masters, Mega Man faces Doc Robot eight times when revisiting the stages of Needle Man, Gemini Man, Spark Man, and Shadow Man. When selecting Doc Robot in the stage selection screen, it will be introduced with a question mark in the character introduction. On each battle, Doc Robot utilizes the program data of one of Dr. Wily's eight Robot Masters from Mega Man 2.

Since the Doc Robot copies the ability and characteristics of one of the Robot Masters from Mega Man 2, the Doc Robot's strategies are more powerful, more deadly versions of the patterns of those bosses. However the player should keep in mind that the Doc Robots have a larger hitbox than the original Robot Masters whose data they copy for their weapons.

Attack power, weakness, and stage locations for each Doc Robot.

Amount of damage in units that each Doc Robot receives from each Special Weapon in Mega Man 3.

See the Mega Man 3 enemies from:

A different "Doc Robot" appears in Captain N: The Game Master. This one is a small and thin doctor robot with glasses and beard that assists Dr. Wily (a literal "Doc" Robot). He only uses Metal Man's Metal Blades to attack, and was smashed by a giant pipe that he cut with one.

The Doc Robot (designated as Diverse Operations Circuit Robot) is seen being constructed by Dr. Light and Dr. Wily in issue 36. Dr. Light and, officially, Dr. Wily, see him as a way to test multiple Robot Master systems at once as an economic alternative to building a single specific Robot Master from scratch. Privately, however, Wily, unsurprisingly, views the Doc Robot as a trump card against Mega Man due to the failure of his individual Robot Masters and Copy Robot. Rock and Roll, when learning of the nature of the development, noted the Doc Robot's use about being more dangerous than Mega Man, resulting in an argument between Wily and Rock. The Doc Robot is also given a brief mention in issue 38, where Dr. Wily privately remarked that he still has one ace up his sleeve, even if Mega Man managed to escape his trap in the mesa and even if he managed to take down all eight of the third generation of Robot Masters before Dr. Light interrupted. During this instance, the Doc Robot can also be seen obscured in shadow behind Wily.

In issue 42, Break Man collects the I.C. chips and weapon data of the eight Mega Man 2 Robot Masters so that Doc Robot can use them against Mega Man. Wily is still working on him in issue 43, and is eventually fully activated in issue 44 despite a security lockdown, as a result of Break Man being cleared for access to Light Labs. Upon being completed by Wily and Break Man, the Doc Robot joins them in confronting Dr. Light and Roll, telling the doctor (with two voices) to not be troubled as they will be quick. In Issue 45, they proceeded to cause a blaze, and asked in multiple voices whether he should fan the flames that are already present, or blow more things up. After learning Mega Man had arrived, he demanded to let Mega Man come as they can handle him effortlessly. However, he was hit by Roll's broomstick, causing him to retaliate (although with some reluctance since she is a kid and a helper robot), hitting her with Air Shooter and then narrowly missing with Bubble Lead after Dr. Light pushed her out of the way. It is also explained that the Doc Robot's multiple voices and his random attack patterns were a glitch as a side effect due to all the second-generation Robot Masters' IC chips being forcibly implanted into his body, as he was supposed to test only one chip at a time and the personalities of all eight were active within his body.

The Doc Robot later forcibly separated Dr. Light from Wily after the former attacked the latter after he was pushed past his limit, and proceeded to blow up the upper portion of Dr. Light's lab on Wily's orders. In the next issue, the Doc Robot interrupted Dr. Wily's progress in achieving total synchronization with Gamma to inform him that Mega Man had arrived at Wily Castle, also notifying him that Mega Man most likely learned the location from Break Man, as the latter had leaked the access codes to Mega Man to have a final battle with him. After watching their battle for a while, Dr. Wily orders that the Doc Robot prepares the defenses while he continues working on Gamma.

After Mega Man defeats the Copy Robot and tries to convince him to stop fighting, the Doc Robot fires a Crash Bomb on the copy's back. Before exploding, the copy pushed Mega Man away to save him. Mega Man realizes that the Doc Robot has Wily's first eight robots inside, and manages to defeat him by causing the robot to overload from his multiple personalities. In "his" final words, the Doc Robot asked Mega Man to have them rebuilt after he defeated Wily, which he promised to do before blasting off Doc Robot's head and copying the weapons he had employed against him.

While in the Doc Robot, each robot had a color in their speech balloon identifying who is speaking:

The Doc Robot is a versatile and powerful combat robot made with a system able to support any type program. Wily originally planned to mass produce this robot in his quest for domination, but the Doc Robot's many qualities made the production cost quite high, allowing Wily to build only eight Doc Robots. By using the combat program from the first eight Wily Numbers, the Doc Robots can be effective on various situations such as aerial battles, land battles, underwater battles, etc, even with the same frame. Unlike the Numbers, the Doc Robots have no individualilty, being closer to Sniper Joes in that regard.[2]

A Doc Robot has a cameo appearance as one of the robots fought by Mega Man in New Metropolis.

In Mega Man Gigamix, Doc Robots appears in the story Asteroid Blues, which is based on the events of Mega Man 3. They help Dr. Wily retrieve the Energy Crystal sample stored back on Earth.

The Doc Robot from Captain N: The Game Master. 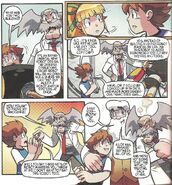 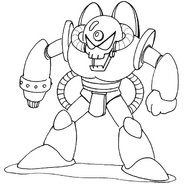