"Besides, I know of these robots. They're some of the finest ever built, and their creator would never intend for them to cause any harm."
―Dr. Cossack, Mega Man (Archie Comics)

Dr. Mikhail Sergeyevich Cossack (Ｄｒ．ミハイル・セルゲイビッチ・コサック, Dokutā Mihairu Serugeibitchi Kosakku, Rus. Михаил Сергеевич Казак) is a character from the original Mega Man series. He first appeared as the central "antagonist" in Mega Man 4, but later became an ally of Mega Man, creating Beat as a gift to assist him.

Dr. Cossack is a Russian robotics engineer that graduated in the Ural Technical University (ヴラル工科大学, Vuraru Kōka Daigaku (rus.) Уральский технологический университет) and is affiliated with the Stravinsky Academy of Sciences (ストラビンスキー科学アカデミー, Академия Науки имени Стравински). He won many awards during his career, including the Brzezinski Science Award (ブレジンスキー科学賞, Brzezinski Science Award) and the Scientific Achievement Award (科学推進功労賞, Scientific Achievement Award). He lives with his daughter, Kalinka Cossack. His hobby is watching ballet.[1][2]

In Dr. Cossack's debut, he sent a message to Dr. Light stating that he has created eight Robot Masters (consisting of Bright Man, Dive Man, Dust Man, Drill Man, Pharaoh Man, Ring Man, Skull Man, and Toad Man) and sent them to take over the world, in order to show the world his genius. Mega Man set out to defeat the eight new Robot Masters, and made his way to Dr. Cossack's Citadel. Just as he was about to defeat Dr. Cossack in the Cossack Catcher, Proto Man appeared with Kalinka and revealed the truth: Dr. Wily had kidnapped Kalinka and forced Dr. Cossack to work for him as ransom.

After Dr. Wily's defeat in the previous game, Dr. Cossack built a robotic bird called Beat for Mega Man to assist him in protecting the world. Dr. Cossack does not appear in the game, only being mentioned in the manual as informing Mega Man of Light's capture, and increasing the firepower of his Mega Buster's charge shot. In the Rockman Complete Works version of Mega Man 5 and its port in Mega Man Anniversary Collection, Cossack serves as the main guide in Navi Mode.

While not appearing in-game, Dr. Cossack is mentioned as the manufacturer of Tundra Man, one of the eight Robot Masters that can be fought.

Dr. Cossack is one of the playable characters. His objective is to build a new lab to continue his experiments.

Dr. Cossack, along with Dr. Light, is responsible for the creation of OVER-1, the main protagonist of the game. He appears in Battle Memory.

Main article: Doctor Mikhail Cossack (Archie Comics)
Dr. Cossack first appears in Archie Comics' Mega Man comic series in the fourth graphic novel, Spiritus Ex Machina. According to this continuity, he had travelled to America as a college student while undergoing his thesis in robotics research, and was likewise an old friend and colleague of both Dr. Thomas Light and Dr. Noele Lalinde because of this.

Dr. Cossack is a robotics engineer from Russia. After graduating with a degree in robotics from the Ural Institute of Technology, he got a job at the Stravinsky Science Academy. One day, Dr. Wily kidnapped his daughter, Kalinka Cossack, and in exchange for her safe return, he was forced to lead eight robots he created into battle against Mega Man. After the truth of this incident was revealed, Dr. Light helped Dr. Cossack clear his name and return to the good geaces of the scientific society. Since then, Dr. Cossack has intensified his efforts in the research and development of robots. He became good friends with Dr. Light and his robots, and created Beat as gift for Mega Man. He is the proud recipient of the Brzezinski Science Award and the Scientific Achievement Award, as well as numerous other prestigious awards.

In Grim Reaper of Resurrection, Dr. Cossack is kidnapped by Skull Man during a live interview with Charlie about a book he wrote, The Future of Human-Robot Relations, selling over ten million copies worldwide. Mega Man and Dr. Cossack's robots rescue him.

After the events based on Mega Man 6 in "The Greatest Enemy in History", Dr. Cossack went to Japan with Kalinka, Dive Man, and Drill Man to help Dr. Light. They first checked the ruins of New Metropolis, where they found the real Mega Man and repaired him, and also Yamato Man and the other robots that were under Mr. X's control.

Dr. Cossack also appeared in Mega Man Gigamix, where he created Duo with the large arm of the white alien robot and assists in the battle against the Stardroids.

Like the game, Dr. Cossack tries to conquer the world, but this is due to Dr. Wily capturing his daughter, Kalinka.

Dr. Cossack gives Beat as a gift to Mega Man, and assists him in his search for Dr. Light and Proto Man.

Dr. Cossack has a brief appearance in the first chapter, where he talks with Dr. Light about the robot tournament.

Dr. Wily kidnapped Kalinka again to force Dr. Cossack help him with the Evil Energy. After Duo damages Wily's stolen flying laboratory, Wily escapes and Cossack goes after his daughter. The two are rescued by Roll, Beat and Auto while Mega Man and Rush fight against Tengu Man.

When Dr. Cossack hears of Dr. Light's partnership with Dr. Wily, he goes to Dr. Light's Laboratory and finds Roll, Eddie, and Beat dismantled. He repairs them and goes after Mega Man with four of his robots to help him. When he arrives, Proto Man was damaged and he repairs him while Mega Man and the other robots go after Dr. Wily and the Wily Patrol.

Dr. Cossack, alongside his daughter Kalinka, were shown waiting for Mega Man close to the 1991 banner, with a 30th Icon containing the key art and footage for Mega Man 4, being at their feet. 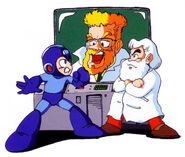 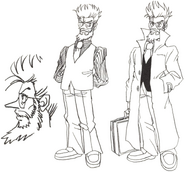 Dr. Cossack in the Rockman 4 manga. 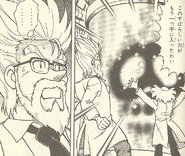 Dr. Cossack in the Rockman 8 manga.

Dr. Cossack in the Rockman 8 manga.