Dogeza (土下座, Dogeza) is an element of traditional Japanese etiquette which involves kneeling directly on the ground and bowing to prostrate oneself while touching one's head to the floor. It is used to show deference to a person of higher status, as a deep apology or to express the desire for a favor from said person. In the Mega Man franchise, dogeza is a recurring gesture performed by Dr. Wily after his defeat in the Mega Man series, with him pretending to be sorry for his actions and pleading for mercy.

In Mega Man Powered Up, a remake of the first game, at first Dr. Wily tries to retreat after his defeat, but is stopped by the player's character. Wily then reels back and starts begging for mercy, promising to be good, appearing to have a change of heart and being ready to work for a peaceful tomorrow.

In Mega Man 3, Dr. Wily starts groveling after the destruction of the Wily Machine 3, but when Mega Man approaches him, he discovers that it is a robot with his appearance, and goes after the real Dr. Wily. After the true Wily is defeated, Wily starts begging for mercy, but the Wily Castle starts collapsing and Wily is assumed to have perished when a large block felt over him.

In Mega Man 4, Wily grovels again after his defeat, but he escapes by using a secret path and activates the self-destruction from his Wily Castle.

After his defeat in Mega Man 5, Mega Man runs after Wily and he starts pleading for mercy when they reach the captured Dr. Light. Mega Man releases Dr. Light, but the Wily Castle starts collapsing and Wily takes the opportunity to escape.

In Mega Man 6, Wily begs for mercy again, but Mega Man doesn't fall for it again, this time capturing him, and Wily is sentenced to prison for his crimes.

Wily escapes in Mega Man 7, but is once again defeated by Mega Man. After his Wily Capsule is destroyed, Wily starts groveling and says "OK, I give up. Sorry about all the trouble. I'll go quietly...". However, Mega Man no longer trusts Wily, and decides to finish him. Wily is surprised by this, but reminds Mega Man that robots cannot harm humans, making him hesitate. In the North American version, Mega Man threatened Wily by saying that he is more than a robot, being determined to kill him, only starting to hesitate when the Wily Castle began collapsing. Some debris fall on Wily, but Bass and Treble appears and helps him escape.

In Mega Man 8, Wily repeats his excuse, saying "S... sorry! I was wrong! Please forgive me!" while groveling, but Mega Man says "...That's the same old apology Wily! Over and over again...", showing that he won't fall for it again. However, the Evil Energy attacks Mega Man, and Dr. Wily takes the opportunity to escape, although not before expressing some shock at the described event.

After his defeat in Mega Man & Bass, Wily starts groveling quietly, but his ultimate creation, Bass, gets angry while his creator shows him the plans for King II, which Proto Man destroys.

Mega Man 9 starts showing an image of Dr. Wily groveling and saying "I'm so sorry. Please forgive me!". After the destruction of his Wily Machine, Wily uses the same apology again, saying "Please forgive me!" while groveling. Mega Man then calls Rush to show Wily all the times he went wrong, showing images of Wily's previous defeats, all having him groveling to Mega Man. Dr. Wily acknowledges that he was defeated again, but he lures Mega Man to a trap and escapes.

After his defeat in Mega Man 10, Wily starts groveling as usual, but he stops due to having a high fever, and is taken to a hospital by Mega Man (either directly, or in the case of the Proto Man and Bass modes, indirectly). He escapes after recovering, although not before willingly leaving behind enough of the cure to eliminate his virus.

After his defeat in Mega Man 11, Dr. Wily says that he has no choice but use "Plan B". Wily jumps backwards in a dynamic way, appearing to be using the Speed Gear, but then he starts groveling, saying "Spare me! I'm a helpless old man! Mercy, Mega Man!". However, having gotten used to Wily's treachery, Mega Man says he can't fool him that easily, to which Wily actually replies back, "...Drat! But don't act so cocky! I didn't lose to you! I lost to my own technology... My Double Gear! I'm the greatest! I'm a genius!".

Dr. Wily simply grovels after his defeat in Mega Man: Dr. Wily's Revenge. Mega Man II is the first game Wily isn't shown begging for mercy, as he tries to escape after his defeat.

In Mega Man III, Wily kneels on the ground after his defeat, but he had a escape planned, a device appearing under him and taking him away. In Mega Man IV, Wily starts groveling as usual, but he was wearing a backpack with a hook inside, which pulled him away from Mega Man.

In Mega Man V, despite his defeat and having his UFO damaged, Wily appears in the ending to attack Mega Man, but his UFO breaks down and Wily falls on the ground. Wily starts begging for mercy for a while, but realizes that will not work and runs away.

In the Wily Tower mode from Mega Man: The Wily Wars, Wily grovels as usual, but he throws an explosive in Mega Man's direction, which he manages to avoid. Wily runs away, and Mega Man tries to catch him, without success.

In Mega Man: The Power Battle, Dr. Wily starts groveling after his fall. In Mega Man 2: The Power Fighters, a fake Dr. Wily appears begging for mercy in the "Search for Wily!" course, and the real Wily begs for mercy after his defeat.

A fake Dr. Wily is seen groveling in Chokkan! Rockman.

Dr. Wily appears in his groveling pose in the ending of the DOS games Mega Man and Mega Man 3.

In Mega Man ZX Advent, Master Albert grovels in the same way as Dr. Wily after his defeat in the Model a minigame.

In Super Smash Bros. for Nintendo 3DS, Dr. Wily is groveling in his trophy. Its description is: "A mad scientist from the Mega Man series who develops deadly robots to try and take over the world. He's not above stealing the robots made by other scientists and modifying them for his own evil ends, either. Dr. Wily has a tendency to beg for forgiveness when Mega Man inevitably defeats him; those tears don't look all that genuine, honestly..."

In Super Smash Bros. Ultimate, Dr. Wily appears as an Assist Trophy piloting the Wily Capsule from Mega Man 7. When the Wily Capsule is destroyed, Wily falls on the ground and starts begging for mercy before disappearing.

In Puzzle Fighter, the groveling from Mega Man 7 appeared as a skill named Sinister Plea. When activated, Dr. Wily charges his super gauge.

During the Mega Man event in Line Rangers, players could obtain eight temporary stickers for the Line application, one of them being of Wily kneeling and saying "It's all my fault".

In the Mega Man event from Dragalia Lost, Dr. Wily appears begging for forgiveness after the Wily Machine 2 is destroyed, in the event epilogue, and in a sticker.

One of Dr. Wily's badges from the Nintendo Badge Arcade has him in this pose.

In the Rockman event from Castle & Dragon, the defeat animation of the Wily Machine 2 has Dr. Wily falling from the machine and begging for forgiveness. 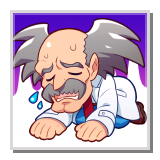 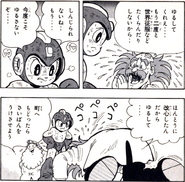