A door is a moving structure used to block off, and allow access to, an entrance to or within an enclosed space, such as a building or vehicle. Doors normally consist of a panel that swings on hinges on the edge, but there are also doors that slide or spin inside of a space. Similar exterior structures to doors are called gates or gateways. Doors, gates, hatches, and similar structures are a recurring element in the Mega Man franchise, first appearing as shutters (シャッター, shutters) in the original Mega Man series. Doors became a common element as a passage between two maps in the Mega Man Zero, Mega Man ZX, Mega Man Legends, Mega Man Battle Network, and Mega Man Star Force series, as well as Mega Man X: Command Mission.

In most platform Mega Man games, a metallic shutter (and in a few games other door types) often appears before a boss and some sub-bosses, and a small area between two shutters are a common checkpoint before a boss room. Shutters automatically open when the player touches them from one side, but they won't open from the other side. In the first Mega Man game checkpoint areas between two shutters had more than one screen in size and also contained enemies. In Mega Man 2 shutters contain a glitch that may cause Mega Man to pass them from the wrong side.

In Mega Man ZX, several doors with different colors (yellow, green, red, blue, and purple) can only be opened with card keys of the same color, blocking access to new areas until they are revelant to the current mission. In Mega Man ZX Advent only a few doors require a card key to be opened. 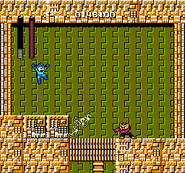 A horizontal shutter in the first Mega Man game 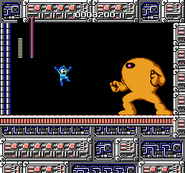 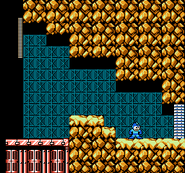 A different shutter in Stone Man's stage in Mega Man 5 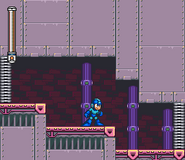 A checkpoint between two shutters in Mega Man 7 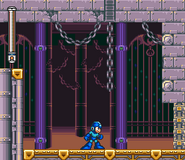 The door to VAN Pookin's room in Mega Man 7 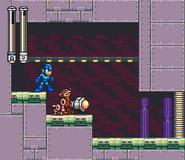 The shutter to Proto Man's room in Mega Man 7 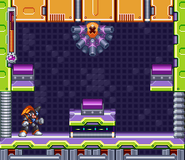 A shutter in the Archie Comics Mega Man series 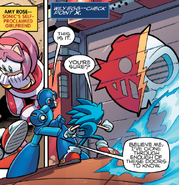 A shutter inside the Wily Egg in Worlds Collide

Shutter in the Rockman 5 manga

Shutter in the Rockman 7 manga

Shutter in Rockman 4Koma Dai Koushin
Add a photo to this gallery
Retrieved from "https://megaman.fandom.com/wiki/Door?oldid=264029"
Community content is available under CC-BY-SA unless otherwise noted.