MMKB
Register
Don't have an account?
Sign In
Advertisement
in: Articles with hAudio microformats, Reploids, Mavericks,
and 14 more

Double (ダブル, Daburu) was a supporting character, as well as a secondary antagonist for X in Mega Man X4. At first appearing to be a simple rookie Maverick Hunter, it is later revealed that he was a spy working for Sigma all along.

In his first form, Double is a short and tubby Reploid. His face is pudgy and his body shape is almost entirely spherical, giving him an unintimidating and goofy appearance. His armor is yellow and brown, and his helmet has a mouth guard that somewhat resembles that of an American football helmet. He possesses a belt around his waist with several red capsules attached.

However, his true form is much more menacing. His body expands, making him much more tall and lean, and revealing most of his armor is translucent and full of what appears to be a pink fluid or gel. His feet, shoulders, and helmet gain large spikes and horns. His eyes also become red with green outlines, and his face turns into a slender sneer. His arms also possess generators that can create purple beam knives.

Double is initially presented as a incompetent and clumsy member of the Maverick Hunters with an earnest personality who is eager serve as X's aide, showing concern for him and advising him. However, this is a ruse he puts on as a double agent working for Sigma, and his true nature is that of a sadistic, violent, and chaotic Maverick. Upon revealing his true form, he mercilessly slaughters the Maverick Hunters who were ridiculing him before going after X, where he reveals he thinks the Mavericks, the Hunters, and Repliforce alike are fools and make his job too easy, and looks forward to ripping X apart. Despite his insane personality, Double has enough discipline and cunning to fool the Maverick Hunters with his humble personality before he is called on by Sigma to stop them.

Double first appears to assist X as his operator after the Sky Lagoon incident and the subsequent beginning of Repliforce's coup d'etat. He introduces himself as a rookie and X finds him somewhat endearing. He can normally be seen waiting on the Stage Select Screen in X's story.

After X begins infiltrating the Final Weapon, Sigma contacts Double and finally gives him the order to let loose on the Maverick Hunters. Double gleefully transforms and slaughters several of the 17th Unit before assuring X over communication that everything is normal. He then travels to the Final Weapon, where he confronts X in his first form again before transforming for battle. X is shocked but is forced to defeat Double. X is emotionally shaken by this betrayal of his trust, and Double explodes after indignantly challenging X to meet him in the afterlife.

Double's body is made of a fluid metal that allows him to change his shape alongside his different personalities: a chubby, teenage-like Reploid and a tall, brutal Maverick.[1] He battles X in his true Maverick form, wielding fearsome agility and beam knives. His dash attacks are easily avoided by staying on the walls, but this makes him change strategies and attack with his energy discs instead.

Double appeared in the Rockman X4 manga. Like the game, he is a spy sent by Sigma to keep an eye on the Maverick Hunters and pretends to be a fan of X. He also interacted with Zero a few times. In the manga, Double was directly responsible for framing Repliforce for the attack on the city by the rampaging Mechaniloid Eregion by placing Repliforce equipment at the scene, next to Eregion's corpse after his defeat.

Double is later seen with a squad of Maverick Hunters at the scene of the disaster who are investigating the wreckage for more evidence. Amid the rubble, even more equipment from the Repliforce is found, further implicating them in the incident. Double then walks up to Zero with a box of mechanical wreckage of Repliforce equipment and happily says that with all the evidence at the scene, Repliforce will be considered guilty. Zero then angrily slaps the box out of Double's arms, but apologizes afterward for losing his temper.

After X infiltrated an old laboratory and managed to incapacitate Split Mushroom without destroying him, Double appears in his combat form and stabs Split Mushroom, following by quickly slicing him into tiny pieces while mocking X. Double says that when the time comes, he will kill X as well, but he does not have orders to do so yet.

When X went on a mission to apprehend rampaging Repliforce soldier Frost Walrus, the soldier was too powerful and defeated him while killing his comrade Blizzard Buffalo in the process. Double decides to console X after this catastrophe at the Hunter base, telling him that his true strength is justice and to not give in to the torment that Walrus inflicted on him. Double mentions how X is the only Hunter they have strong enough to go after Walrus.

Later, Double watches from afar as General kills Frost Walrus in the middle of his rematch with X as punishment for Walrus's misconduct. General then proceeds to take on a full barrage of X's blasts without damage, and then walks away. Double surmises that General was showing respect and an apology to X by letting himself be attacked, after he gave Walrus the sanction of death for breaking military regulations.

After an Ultimate Armor-powered X beats General to the point of unconscious in the Final Weapon, Double confronts X in combat form and mocks them both. Double then reveals his treachery to X by revealing his normal face, and tells him how he was the one responsible for the Maverick attack against the city that Repliforce was falsely suspected of. Viciously slashing X with his blade, Double tells him how he used Eregion to attack the city while installing Repliforce equipment in the Mechaniloid to make the military organization look guilty, all according to Sigma's plan of an "assassination game". Double says it was amusing to watch the Repliforce and the Hunters destroy each other. X is enraged by this and sheds tears of anger, and uses the power of the Ultimate Armor to tear through double with a Nova Strike charge. Double marvels in disbelief at X's power before he dissolves, and an orb falls out of his body. X then blasts the orb that fell out of Double's body to make sure he wouldn't regenerate.

Double was one of numerous Mavericks resurrected by Sigma-1 using the power of the Genesis Portals to form an army to battle Sonic the Hedgehog and Mega Man's team of allies. However, he and his fellow Mavericks were then attacked by the arriving Street Fighters, with Guile giving Double a taste of his Sonic Boom technique (Sonic not being particularly impressed by the ability's name) and finishing him with a Dragon Suplex. 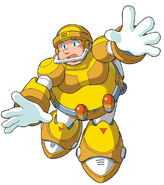 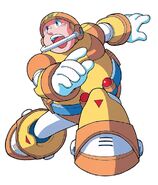 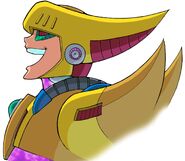 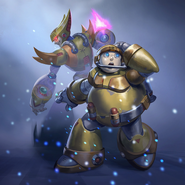 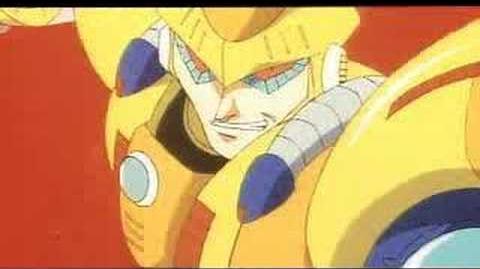