The Double Gear System (ダブルギアシステム, Daburugiashisutemu) is a gameplay feature from Mega Man 11.

The Double Gear System is a device first developed by Dr. Wily in his youth during his days at Robot University alongside a young Dr. Light. Dr. Wily believed creating robots that utilized the Double Gear System, granting them "unstoppable power and insurmountable speed", would cause humanity to celebrate their scientific achievement and accept robots for what they were as opposed to mere tools, since that kind of power could turn any robot into a "hero". However, since the Double Gear System pushed robots beyond their limits, it proved to be dangerous to their internal systems. As a result, a committee was convened to decide whose research would be funded - Dr. Wily's research or Dr. Light's research into robots with independent thought. It concluded with the committee choosing to halt Wily's research and support Light's instead. Outraged that Light's ideas were favored yet again, Wily threw his prototype Double Gear System to the ground, breaking it. He then stormed off as Light looked on in shock, claiming that one day the world would know he was right all along. This was the final straw which ultimately ended their friendship forever. Meanwhile, Dr. Light kept Wily's prototype Double Gear System and repaired it before the events of Mega Man 11.

In Mega Man 11, Dr. Wily remembers the Double Gear System after having a dream of the aforementioned past and decides to finish its development. He decides to use it on his new attempt to conquer the world. Dr. Wily broke into Dr. Light's Lab, stole all eight of his Robot Masters, and gave them parts of the Double Gear System to use as test subjects. Under Mega Man's request, Dr. Light reluctantly installs the prototype Double Gear System he had kept on Mega Man, giving him new abilities to use against Dr. Wily's robots. The Double Gear System grants Mega Man increased speed and power via the Speed Gear and Power Gear respectively. However, a side effect from overusing these gears is that they will overheat Mega Man, preventing him from using the system again until after the cooldown has ended. If Mega Man installs the Cooling System part, it can speed up the cooldown process. There's also a more powerful variant, the Cooling System ∞ part which prevents any kind of overheat whatsoever, allowing Mega Man to use the Double Gear System indefinitely, but this part can only be purchased after completing the main game.

Speed Gear (スピードギア, Supīdogia) is a blue gear that increases the speed of robots. Gameplay-wise, it slows down time when used by Mega Man, representing his increase in speed; using the Speed Gear allows tight platforming and enemy evasion easier but he moves at a slower pace. The Speed Gear's effect is similar to the Time Slow's effect in Mega Man Powered Up, with the difference being that Mega Man now creates blue afterimages when moving around while the Speed Gear is activated. If the Speed Gear Booster part is installed, Mega Man can move at normal speed while Speed Gear is active.

Aside from Mega Man, the Wily Machine 11 (V2), Fuse Man, Tundra Man, Acid Man, Bounce Man, and Yellow Devil MK-III also have Speed Gears installed in them. Wily also installed one on his UFO. He even uses Speed Gear himself after his ultimate defeat, though only to quickly fall to the ground and begin his classic begging routine, and it can easily be interpreted as a mere visual gag.

Power Gear (パワーギア, Pawāgia) is a red gear that increases the power of robots. When used by Mega Man it makes his default shots bigger (but he can only fire two at a time instead of three) and allows him to shoot two Charge Shots together (a regular charged shot followed by a red colored charge shot), knocking Mega Man back a little due to its power. The Power Gear also increases the power of his Special Weapons. If the Mega Buster is fully charged when the meter reaches its limit, it will be possible to fire an extra-powerful Final Charge Shot (ファイナルチャージショット, Fainaruchājishotto), but at the price that the cooldown period from overheating cannot be prevented. Notably even if the gauge meter reaches maximum, Mega Man will not enter cooldown mode while charging until he either fires the Charge Shot, deactivates the gear, or is damaged. If the Shock Absorber part is installed, it can prevent the recoil effect from using these special Charge Shots.

Double Gear is only available when Mega Man is low on health, which can help him in a pinch. By simultaneously activating the Speed Gear and Power Gear, Mega Man can use them together. Time will slow down, powered-up Special Weapons can still be used when using Double Gear, and the Final Charge Shot will be easier to use. However, unlike the individual gears, it cannot be canceled when activated, and when its duration is over it will leave Mega Man severely weakened due to the overheat; he won't be able to use the gears or even fire charge shots until he's cooled down, and he can only fire one shot at a time instead of three. Also, due to the severe strain, the cooldown period will take longer than normal to end.

An optional part called the Energy Dispenser can be used to lower Mega Man's health low enough to be able to use Double Gear more easily, but it increases the risk of losing a life.

Dr. Wily's Wily Machine 11 (V2) is also capable of using Double Gear when its health is low, allowing it to use a quick dash/teleport attack which continues on until it is defeated.

Besides its default setting, Mega Man can be enhanced with additional power-up parts for his Double Gear abilities. Note that for the Cooling System parts only one may be equipped at a time due to being the same type of part.

Power Gear in the Rockman 11 manga 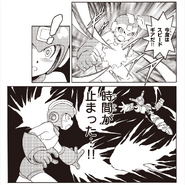 Speed Gear in the Rockman 11 manga

Double Gear in the Rockman 11 manga