Dr. Cossack's Citadel, also known as Cossack Castle (コサック城, Cossack Castle), is Dr. Cossack's fortress in Mega Man 4. After the defeat of all eight Robot Masters, Mega Man must go through the castle, which consists of four stages. Mega Man fights against the bosses Mothraya, Square Machine, Cockroach Twins and Dr. Cossack inside the Cossack Catcher. After Dr. Cossack's defeat, Proto Man appears with Cossack's daughter, Kalinka, and it's revealed that Dr. Wily captured Kalinka to force Dr. Cossack to work for him.

Dr. Cossack's Citadel also appeared in the Game Gear Mega Man. Although the beginning of the final stage shows the Wily Castle from Mega Man 4, the ending shows Cossack's Citadel exploding instead, being possibly a mistake from the game, or just Wily destroying it in retaliation to his defeat.

The first stage of Dr. Cossack's Citadel. Mega Man begins outside in snow and makes his way up the walls of the citadel as a snowstorm begins, hindering the penetration of the citadel. At the end, he faces a giant moth monster named Mothraya.

The second stage is set inside the main hall of the citadel and has a long area full of spikes that Mega Man can only cross by Rush Jet. There are also small square platforms that must be carefully crossed, because they have spikes on them that can change sides. In the end, he faces a very big and square shaped machine.

The third stage is a scrolling stage. It takes place in the clouds above the citadel in daylight and requires lots of jumping on moving platforms. In the end, Mega Man faces two monsters that can walk on ceiling and walls, the Cockroach Twins.

The last stage. The action returns to the citadel, now at night. At one point, the path splits in two, and Mega Man must choose to take either the upper route or the lower route. However, the lower passage is blocked by a barrier that can only be opened up by blasting it with a Drill Bomb. He then faces in the end Dr. Cossack, mounted in his plush-picking like machine.

Interestingly, the two stages here are direct copies of Wave Man and Toad Man's stages retrospectively, with no signs of the stages actually taking place in the citadel itself.

The first stage is a water quality management station. One area contains floating bubbles that Mega Man must use to reach the top, and near the end of the stage he drives a Marine Bike.

The second stage has several areas with rain and wind as well as water currents that pushes the player back and makes pitfalls more dangerous.

In the manga Mega Man Megamix, the citadel is the home of Dr. Cossack's family. However, during the Return of the God of Death story arc, it is attacked by Skull Man (Clad in a black cloak and scythe, resembling a Grim Reaper) and Reggae leading an army of Skeleton Joes into the Citadel, kidnapping Dust Man, Pharaoh Man and Drill Man in the process. Ring Man goes after Mega Man to ask for help and warn about Skull Man, but he learns Dr. Cossack was captured by Skull Man while giving an interview in the TV. Mega Man and Roll use Item-2 to travel to Cossack's citadel and find it in ruins. The two find Kalinka, Dive Man, Bright Man and Toad Man in the citadel and leave the area to find Dr. Cossack and his captured robots. 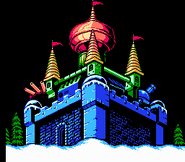 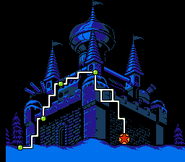 Retrieved from "https://megaman.fandom.com/wiki/Dr._Cossack%27s_Citadel?oldid=293944"
Community content is available under CC-BY-SA unless otherwise noted.