Cossak (コサック, Kosakku) is a character from Mega Man Battle Network 3. He was Bass.EXE's creator.

While it was not shown what Cossak was like before the Alpha Revolt, it can be assumed that he and Bass once had a close relationship until Bass was framed for the Alpha Revolt and believed that Cossak betrayed him when he didn't come to clear the misunderstanding. In WWW's base, upon learning what Bass had become, Cossak was willing to do whatever it takes to bring him down, even at the cost of his own life and urges Lan and MegaMan to delete him.

In the MegaMan NT Warrior manga, Cossak's relationship with Bass is explored a little bit more. He was always supportive of Bass and stood up for him, while the other scientists and their NetNavis believe Bass to be a troublemaker. In the unseen story, "Forte x Serenade: The Legendary Battle," the relationship was so close that he referred to Bass as his "precious son." Cossak was also saddened by the fact that Bass was supposedly deleted during the Alpha Revolt, but was also hopeful that he created a program that would let Bass jack-out and transfer to his PET if he was still alive (Bass, however, refused).

When he worked at SciLab, he was in charge of the project that created Bass. Cossak tried to make an AutoNavi, a NetNavi that could operate on its own without a NetOp but when Alpha began malfunctioning, he was blamed. Bass was assumed to have been deleted but survives. Cossak was arrested but was released at a further point in time.

Years later, he tries to stop Bass in Mega Man Battle Network 3. Dr. Cossak is seen by Lan and his friends during the FlashMan arc, at night. If he is talked to, he warns them not to stay out late. Cossak is walking to the ACDC train station when Chisao arrives. He asks for directions but Cossak tells him he has to go to a meeting and leaves. He also appears during BubbleMan's attack, where he helps Lan modifying the PET to allow MegaMan pass by small areas. When MegaMan fights against Bass in the Undernet and is knocked out, Cossak's NormalNavi appears to fight against Bass, being almost deleted, but Bass leaves when Wily called for him saying he has the four TetraCodes. Cossak hears this and suspects they are trying to awaken Alpha. In the WWW's base, Cossak appears to help Lan, Tora, Chaud and Dex. Dr. Cossak explains his past and connections with Bass and then transmits himself into the Cyberworld using Pulse Transmission. He is opening a pathway when Bass arrives and attacks him while bringing up the past that causes Bass to show his scar to him because of his carelessness. Cossak argues that what happened to Bass can't be used as an excuse for his current action and he determines to delete his old Navi at any cost. In the ensuing battle, Cossak is badly injured and the effect of attack also affecting his real body on Pulse Transmission. Tora then takes him to the hospital and Lan tells him what happened in Castle Wily. Some speculate that Cossak survived because Bass couldn't bring himself to kill his former partner.

Later, he is briefly mentioned after MegaMan defeats Bass in Secret Area. MegaMan reminds Bass of Cossak. Despite his amnesia, he seems to remember slightly but leaves.

Like the games, Cossack was in the project that created Bass in the MegaMan NT Warrior manga. He appeared in two side stories (one of them that's Japan-only) telling of Bass' origins and was mentioned in the last side story.

In the first side story, Cossak stops Bass from damaging the Navi units any further and tells him to apologize to everyone, which Bass did, much to other scientists' shock. When the scientists were discussing the results of Bass' actions, all of them decided that Bass must be deleted. Cossak was the only one to object the decision, reasoning that Bass actions have also solved many holes and mistakes and insisted that Bass is 'alive', but the other scientists only sneered at Cossak's backlash. To protect Bass, Cossak reluctantly placed Bass in jail and made him wore limiters. Cossak apologizes to Bass since this is the only way he could prevent him from being deleted. To cheer his creator, Bass compared the limiters he was wearing with bracelets and anklets that humans use, asking does it suit him, which Cossak tearfully said it is. Sometimes afterward, Alpha Revolt began and Bass is freed from his cell, but this resulted in him being blamed as the one responsible for the disruption. Cossak didn't come to clear the misunderstanding, leading Bass to believe that he betrayed him.

In the second side story, it's revealed from the message that Cossak has given to Serenade that when the Alpha Revolt began, Cossak freed Bass from his cell with intend to jack him out to safety, but was arrested and branded as a traitor before he could do so. He was made to believe that Bass has been deleted, but he was glad and happy when he heard that he is still alive and wished for him to return to his side with the program that would let him jack-out to his PET. Unfortunately for him, Bass, already consumed by anger and hatred for too long, refused to jack-out and presumedly destroyed the program as he attacks Serenade. However, in the last side story, it's revealed that even though Bass refused to reconcile his bond with Cossak, the Navi actually still has a lingering attachment for his creator. 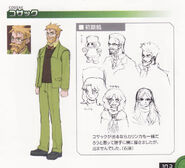 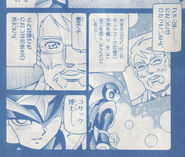 In "Forte x Serenade: The Legendary Battle, " the father/son relationship between Cossak and his creation, Bass.EXE, is apparent.
Add a photo to this gallery

Retrieved from "https://megaman.fandom.com/wiki/Dr._Cossak?oldid=309475"
Community content is available under CC-BY-SA unless otherwise noted.