"How do you feel now, Sigma? Did you like my special vaccine for the Sigma virus? X, I'm sorry to have given you so much trouble. I know I can never really atone for what I've done... But I will try to set things right by taking Sigma with me!!!"
―Dr. Doppler, Mega Man X3

Dr. Doppler (Ｄｒ．ドップラー, Dr. Doppurā) is a Reploid scientist who is the main antagonist of Mega Man X3. Originally a benevolent researcher and supervisor of Dopple Town, one day the Reploids whom he had supposedly vaccinated against the Maverick Virus turned Maverick, revealing that it was a ruse and Doppler was Maverick himself. He is the creator of the Nightmare Police and a vaccine against the Sigma Virus, and is also responsible for resurrecting and upgrading Vile and Sigma.

Dr. Doppler resembles an elderly man with a curved white beard and a wild head of hair that flows upwards. Despite his apparent old age, he has an advanced Reploid body covered in grey and blue armor. Two large canisters or dynamos protrude from his shoulders, with tubes connected to his back and wires connected to a band on his forehead. Also holes on each of his figertipes. He normally wears a labcoat with holes accommodating his dynamos, though he removes it for battle to reveal his red shoulderpads.

Dr. Doppler is a genius of engineering. He was originally a selfless genius who wanted to improve the lives of both humans and Reploids alike. He desired to help Mavericks reintegrate into society, and was working on a vaccine to suppress the Maverick Virus. After becoming infected by the Sigma Virus, he became dangerous and fanatically loyal to Sigma. He was a cunning strategist who studied X's battles and sent the Nightmare Police to hunt him, preferably alive so he could study his abilities, a decision that was mocked by Vile, who claimed that he was being too kind. Doppler showed confidence and annoyance, telling Vile to watch his mouth.

After his defeat, Doppler returned to his old self and felt remorse for his actions, urging X to destroy Sigma. He potentially sacrifices himself to defeat Sigma in a certain ending, while stating that he could never really atone for what he had done to his fellow Reploids.

Dr. Doppler became famous for creating an anti-virus to the Maverick Virus using his advanced Neuro Computer. The reformed Mavericks he had treated constructed Dopple Town in his honor, meant to be a utopian city without Maverick activity. Doppler also created the fearsome Nightmare Police, Bit and Byte, who would help keep peace in the new city.

However, at some point Doppler became infected with the Sigma Virus and fell under the influence of Sigma, resulting in him becoming an ambitious fanatic. It turned out his anti-virus was little more than a placebo, and the "reformed" Mavericks of Dopple Town banded together into a dangerous army with Doppler at the helm. He also began building a new, giant battle body for Sigma by stealing the data of the newest Reploid models.

After X defeats two of the eight Maverick bosses, Dr. Doppler is impressed and irked by X's power. He orders Bit and Byte to attempt to capture X, alive if possible. He then speaks with Vile, whom he resurrected to serve him in the war. Doppler reprimands Vile for his disrespect, threatening to throw him back in the junk heap, before Vile departs to do things his own way. Doppler is not concerned by Vile's insubordination, but remains baffled that X has defeated defeat Sigma twice in the past already.

Seeing that his men failed to accomplish his objectives, Doppler started taking measures of defense against X and Zero. Depending on the player's actions, this could include preparing Press Disposer and Volt Kurageil to defend his laboratory, or modifying Bit and Byte so they can merge into Godkarmachine O Inary.

Doppler himself faces X at the end of Doppler Stage C. Doppler reveals he is indeed aligned with Sigma and attempts to sway X to his side via flattery, but fails, resorting to steal his body for Sigma by force.[2] Upon being defeated, Doppler returns his senses, telling X about Sigma's new body and where to find it in hopes that he'll be able to destroy it.

What happens to Dr. Doppler afterwards depends on whether or not Zero is active. If Zero is still active, Zero arrives with Doppler's actual Sigma Virus vaccine equipped on his saber and incapacitates Sigma (in the English version, Zero claims that the reformed Dr. Doppler gave it to him, while in the Japanese version he claims to have found it himself in the lab). If Zero was taken out of commission, Dr. Doppler takes Zero's place, using the vaccine on his own body and sacrificing himself to stop Sigma. Either way, Dr. Doppler has made no subsequent appearances, so his canonical fate is unknown.

Upon going Maverick. Dr. Doppler modified his body for battle. Despite this, his attacks are still mostly defensive in nature. He can create a green force field around himself to absorb enemy fire and convert it into health, but it requires him to stand still. His other barrier attack is a red one that completely nullifies damage, and which transforms into a fiery wall when he dashes forwards. He can also fly with the boosters on his feet and throw orbs of yellow energy. His weakness is Acid Burst.

Doppler: I've been waiting for you X. I'm Dr. Doppler. I've been watching your battles closely. Your victories over my men have been most impressive. I need superior reploids like yourself, X! I offer you the chance to join us. Together we shall build a Utopia where the Reploids rule under the watchful eyes of Sigma, our lord and master.

X: No way, Doc! Your schemes end here and now!!

Doppler: Perhaps you are not as smart as I once thought! Prepare to be ripped apart and to be born again as part of the new body of Sigma!

Doppler: You are strong, X... Strong enough to defeat Sigma...

Doppler: Sigma's true form is that of a computer virus... I was corrupted by him and... I created a horrific new body for him...

Doppler: It's in the underground hangar of this lab... I don't think Sigma has occupied it yet... Don't worry about me... Destroy the body before it is too late. Time is running out...

In Iwamoto Yoshihiro's Rockman X3 manga, Dr. Doppler is a colleague and best friend of Dr. Cain, who was deeply disheartened to see his friend's descent into rampancy. Dr. Doppler created Worms to enter Reploids and turn them into Mavericks, upgraded his own body, sent the Nightmare Police to capture X and Zero, and also sends data of X and Zero to improve Sigma's new body. After the defeat of his forces towards the end, Dr. Cain tries his best to save the injured Dr. Doppler, who is able to briefly return to his pre-Maverick self. However, when Sigma reveals himself, Doppler is unable to resist Sigma's influence and attacks Cain and X. Still, Doppler opted to commit suicide rather than revert into a Maverick and harm his friend by ripping his own innards out. However, Dr. Cain managed to salvage Doppler's data and saved it in the computer.

In Rockman X Mega Mission 2, the Mother Limited is shown to have survived and slowly regenerated, becoming Tackione and forming the Order Breakers. Although Dr. Doppler himself doesn't make an appearance, Tackione has the face of its creator.

Doppler's Limited research would later be used by Isoc to create the Extreme in Rockman X Giga Mission.

Dr. Doppler appears in the story Mega Mission, which is based on the first Rockman X Mega Mission Carddass. His role is mostly the same, but he is shown to have retractable tools in his hands and has an unnamed Reploid assistant. 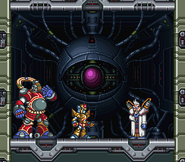 Dr. Doppler with the Nightmare Police. 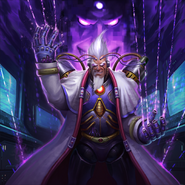 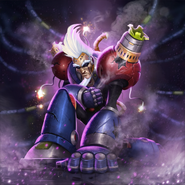 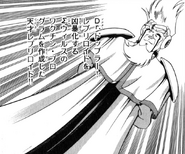 Dr. Doppler and Dr. Cain in the manga

Doppler's upgraded body in the manga

Doppler's death in the manga 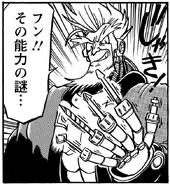